A rare painted lead figure of a Lyons Tearoom "Nippy" waitress made by Pixyland (Kew) in 1928. 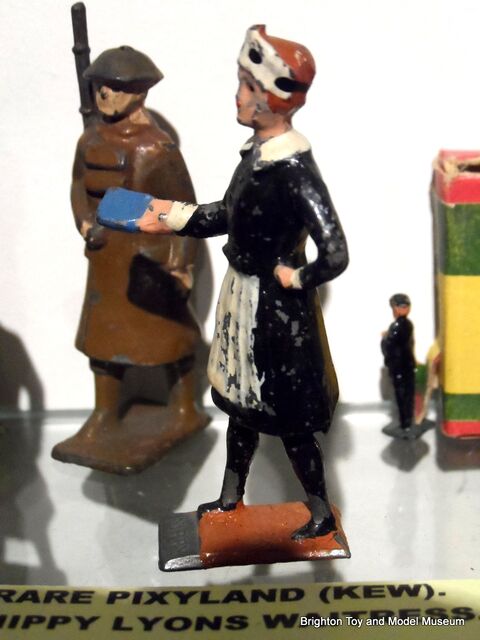 J. Lyons & Co (founded 188) had a popular chain of tearooms across the UK, and the waitresses wore distinctive black-and-white uniforms. In the 1920s due to their habit of swiftly nipping back and forth between tables and counter, they became known as "Nippies".

Lyons Corner House tearooms and the Nippies became a British institution, and the company logistics became so complex, with a national network of tearooms serving highly-perishable goods (such as cream cakes) and requiring them to be delivered daily from central depots, that Lyons developed the world's first business computer system, LEO (Lyons Electronic Office) to manage the system.

After a series of acquisitions, Lyons became so big that it must have seemed unimaginable that they would ever disappear, but the company's enthusiasm for spending their revenue on new acquisitions (and borrowing more money from the US to snap up bargains) led to them becoming financially over-extended. When interest rates rose in the 1970s, Lyons were taken over by Allied Breweries, who gradually sold off the company, piece by piece, so that they could afford to buy other companies that were more in line with AB's core business.