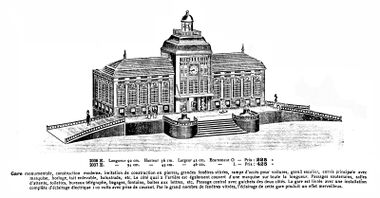 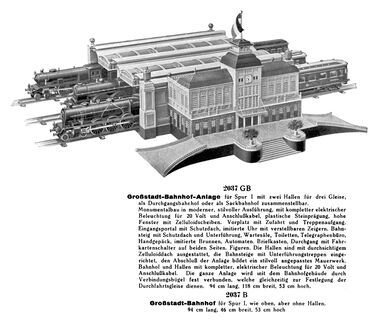 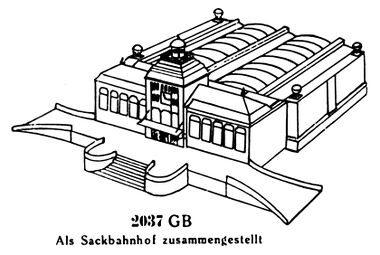 This gloriously extravagant electrically-lit tinplate Märklin Grand Station is is the centrepiece of the classic gauge 0 1930s model railway layout. The model was referred to as "Kleiner Leipziger" (Little Leipzig Station), after Leipzig Bahnhof, the station in Leipzig, Germany that it was modelled on. Marklin produced the Leipziger station though the 1920s (~1919-~1931), in two sizes corresponding to catalogue numbers 2036 E and 2037 E, with the "E" standing for "electric lighting". 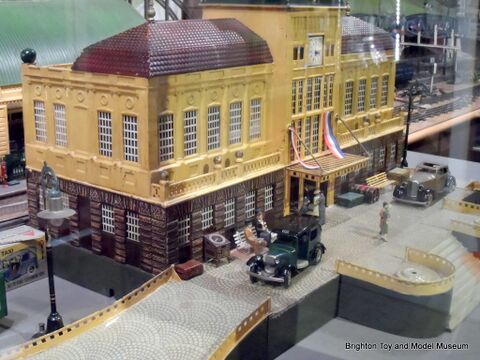 Märklin's "Grand Station", at the front of the gauge 0 1930s model railway layout, in Arch Three. Note that the front ground-floor windows are raised up above the level of the front concourse, unlike the illustration for the gauge 0 version. 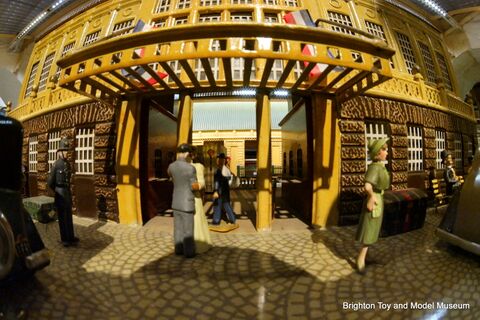 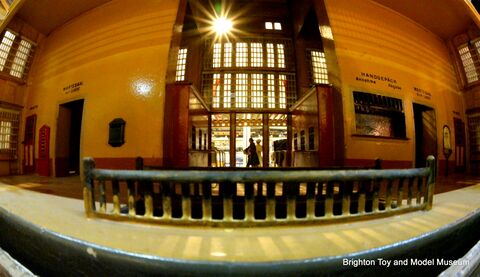 The view from the platform, looking out towards the station entrance, Märklin 2017

Märklin produced "nominal" gauge 0 and gauge 1 versions of the station, but since grand public buildings of this sort don't have an obvious scale (they are usually built with oversized high ceilings and large windows that don't relate to the size of a human), the nominal scaling of the two stations is slightly arbitrary – they both use the same size window-stampings, and are simply "more grand" and "less grand" versions of the same design, with the bigger version having a higher brown ground floor section. The owner of a gauge 1 model railway would probably want the larger model, but the owner of a gauge 0 layout could happily use either (if they could afford the stonking great pricetag!)

The museum's version is the nicer, larger 2037 E model nominally classed as suitable for gauge 1, but it works beautifully with the gauge 0 accessories on the layout.

Completed in around 1915, the massive Leipzig Bahnhof was so big partly because it was essentially designed to be two separate station buildings fused together. The combined double-length frontage had two separate entranceways, one for each of the two railway companies that would be sharing the complex, with the combined double-building being symmetrical to produce an even more imposing effect (and perhaps to stop either of the two companies complaining that the other guys' side of the station looked better!).

Give that the station (as built) was widely recognised at the time as being two duplicated sections, Märklin decided to make their model based on the station consist of just one station section – a "half-Leipzig", or "little Leipzig" ("Kleiner Leipziger"). For any customers with sufficiently deep pockets who felt like complaining that they'd been short-changed, the answer was simple - Create the "full Leipzig" by buying a second Märklin 2037, removing one side-ramp from each station, and then butting them together!"

Apart from its embossing, the side-ends of 2037 were pretty much flat, the roof didn't "jut" out to the sides, and the line where the side-ramps attached to the concourse was in line with the building end. With a pair of 2037s, other than the slight gap and a central cleft in the combined butted roof, the result would have been extremely Leipziggian.

This trick didn't work with the cheaper Märklin Leipzig-based station models, which tended to have a base that jutted out all the way around the station building, preventing a pair from being butted together (without surgical modification). However, anyone with the funds to buy two stations to achieve authenticity would probably have wanted the nicer, larger model anyway.