The station set has a pinned plywood construction. The station building has a green stepped roof, painted clock and "King's Cross" sign, and open platform and covered platform sections (the latter with a curved clear roof).

The curved clear roof is a single sheet of plastic with black printing. 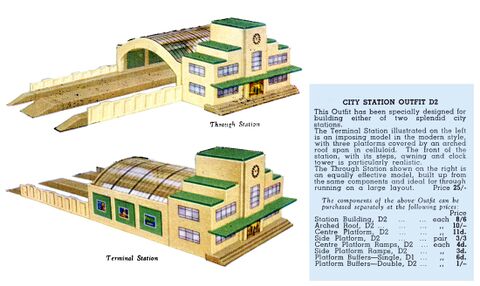 "This Outfit has been specially designed for building either of two splendid city stations.

The Terminal Station illustrated on the left is an imposing model in the modern style, with three platforms covered by an arched roof span in celluloid. The front of the station, with its steps, awning and clock tower is particularly realistic.

The Through Station shown on the right is an equally effective model, built up from the same components and ideal for through running on a large layout. Price 25/- "

"The components of the above outfit can be purchased separately at the following prices:"