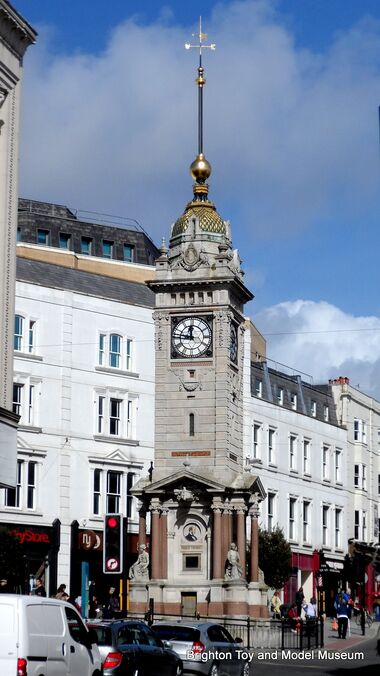 View of the Clock Tower, from the South (ish) [image info] 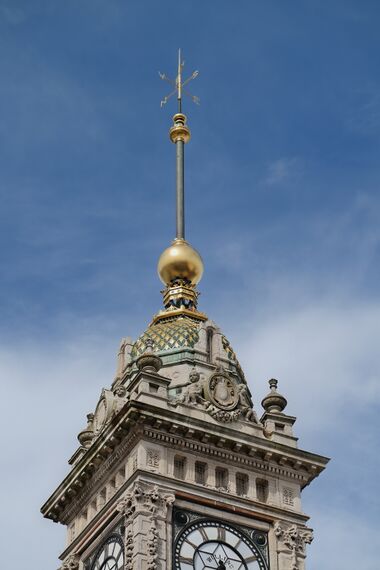 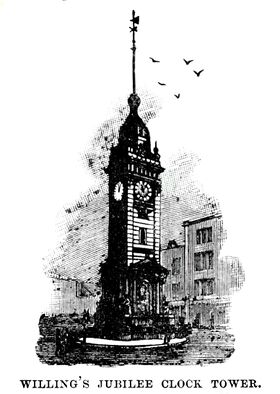 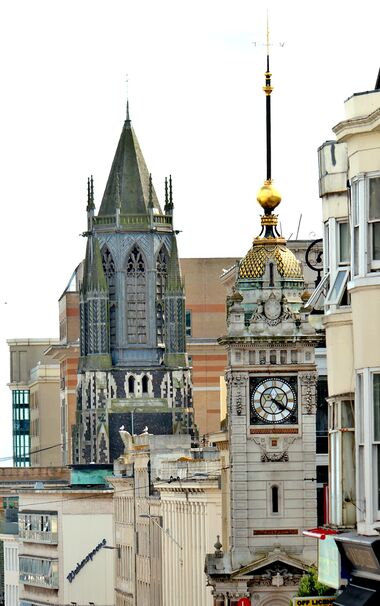 View from the bottom of Queens Road, past the Jubilee Clock Tower and St Paul's Church, towards the sea [image info] 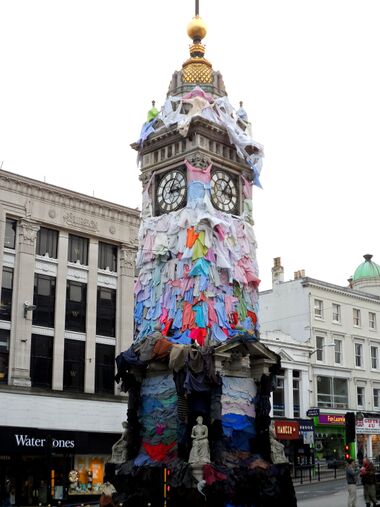 The Clock Tower in Brighton is one of the city's best-known landmarks, and its location and visibility makes it a handy meeting place.It's at the bottom of Queens Road, not too far from the bus stops at the Churchill Square Shopping Centre.

It was built in 1888 for Queen Victoria's Jubilee, and was one of many Jubilee Clock Towers constructed independently around the country to mark the occasion. The Brighton Jubilee Clock Tower was paid for by James Willing, whose surname is marked on the clock faces.

On Coronation Day, this costly and useful structure was publicly unveiled in the presence of a large crowd of persons with due ceremony, and with some pleasant excitement. Of course, when a structure 76 feet high, and occupying one of the most prominent positions in a large and crowded town, has been slowly rising day by day for months, and approaching the form the Architect had designed it ultimately to assume, one has to "make believe very much" when it comes to the unveiling. Still, it is but fitting that some kind of public dedication of such a valuable and permanent local memorial of an historic event as rare and noteworthy as the Jubilee of the Reign of our Gracious Queen should take place, and the proceedings were appropriate and gratifying.

Costing £2,000; built of Portland stone, enriched with shafts of red Aberdeen granite, and embellished with carving, the Clock Tower, as it stands in North-street Quadrant, with its gilt time-ball, direction indicators, weather tablets, seating accommodation, and utility as a refuge, will always be a boon to many, and is generally admired. The portraits of the Royal Family, which decorate the base of the Tower, may be spoken of in more qualified terms of praise, and one wonders why the names are appended to each illustrious personage.

The unveiling ceremony took place on June 28th, at one o'clock, in the presence of several thousands of spectators. Mr. Willing arrived upon the scene by half-past twelve, in company with His Worship the Mayor of Brighton (Alderman E. Martin), who was attired in his robe and chain of office ; the Town Clerk (Mr. F. J. Tillstone), too, was there in his official gown, and the Mace Bearer in livery, and with the Corporate insignia, which made its first public appearance, if we mistake not, in connection with the Jubilee Celebration in Brighton.

Inside the barrier, surrounding the base of the Tower, stood Sir Arthur Paget, Sir Robert Peel, and a considerable number of townsmen. A photograph of the group was first taken, a dedicatory prayer was then offered by the Rev. A.D. Freeman (Vicar of Preston) ; the time-ball rose and fell, and exactly at one o'clock Mr. Willing loosed a cord, by which some lines of flags were set free (this was the unveiling) amidst applause from the crowd; Mr Willing handed to the Mayor a gold key of the entrance door to the Tower, in token that the building had been made over to the town, and the ceremony concluded.

Of course, there were speeches, congratulatory and complimentary ; Mr. Willing's being of the briefest, but exceedingly hearty and well-received. A shower of gilt medals (with a representation of the Clock Tower upon them), for the moment mistaken for coins, occasioned a scramble among the crowd, but no mischief was done, and all soon dispersed. A grand banquet at the Dome followed the unveiling, and one pleasant event connected with the day's proceedings, was the presentation of a Silver Salver to Mr. Willing by the Mayor, on behalf of the Corporation, and an Illuminated Address.

Thanks for his generosity and public spirit, Willing's Clock Tower is a distinct addition to the public attractions of Brighton.

The golden "Time Ball" on the top of the tower was designed by Magnus Volk to be hoisted up the pole and dropped on the hour as a visual timing signal (similar to the time-ball at Greenwich Observatory used by passing shipping to synchronise their clocks). The ball's operation was disabled after complaints from locals about the loud noise that it made.