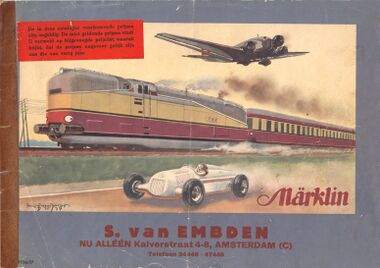 An exact copy of the Märklin prototype modelHenschel/Wegman steam locomotive made in the 1930s, with a set of four matching carriages, produced by Meistercraft in the 1990s.

The futuristically streamlined German Henschel/Wegman steam train entered service in ~1936, and Märklin were gearing up to produce an 0-gauge model of it. The company produced a set of plans and a prototype, and commissioned artwork of the real Henschel-Wegman for the front cover of their 1936-1937 catalogue.

Although the catalogue cover went ahead, the company's model didn't, with WW2 disrupting metal toymaking and also taking the real Henschel-Wegman out of service.

After the War, Märklin never did produce the model, and it was left to Meistercraft to recreate and produce the Märklin "never-wasser". 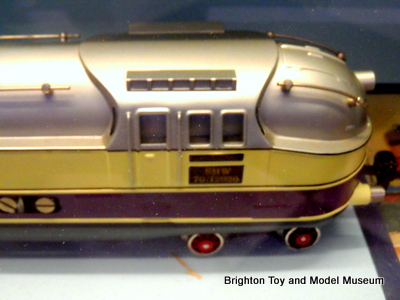