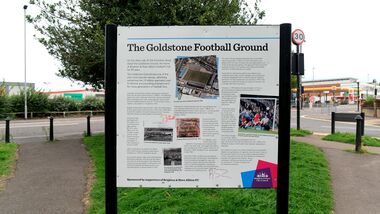 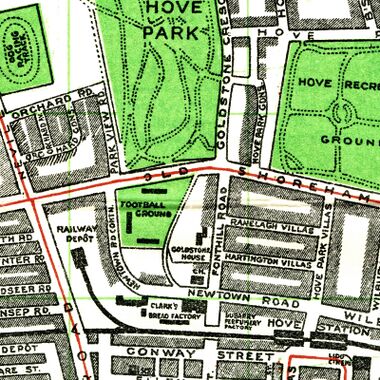 The Goldstone Football Ground was the base for Brighton & Hove Albion Football Club from 1902 to 1997.

The ground was situated directly south of Hove Park, on the other side of Old Shoreham Road, the area is now occupied by Goldstone Retail Park.

On the other side of Old Shoreham Road stood the Goldstone Ground, the home of Brighton & Hove Albion Football Club for 95 years. The Goldstone Ground was one of the city's most popular venues, admitting something like 23 million spectators over its lifetime and providing entertainment for many generations of football fans.

Originally a level grazing meadow belonging to Goldstone Farm, the site was used for hockey in 1900/1901. The following season the owner, Alderman John Clark, erected a perimeter fence, changing rooms and a small spectator stand, and let the new football ground to Hove FC. The first match, Hove v. Clapton, was played on 7 September 1901.

Brighton & Hove Albion were formed in 1901 and initially played at the Sussex County Cricket Ground. In 1902, Hove invited them to share the Goldstone Ground to help pay the rent. Two years later Hove moved out, leaving Albion as sole tenants.

The ground was developed with the addition of a South Stand and open seating. By 1910, when Albion won the Southern League and FA Charity Shield to become "Champions of All England", it had a capacity of around 12,000.

Albion closed down during the First World War and the ground required a great deal of restoration in 1919 for football to resume.

Cup matches against major clubs attracted large attendances between the wars and saw Albion successful on several occasions. The freehold of the ground was purchased in 1930 and the first North Stand erected the following year, but it was destroyed by a German bomb in 1942.

Attendances increased greatly after the Second World War and numerous improvements were made. In 1848, the Goldstone Ground hosted a match between Luxembourg and Afghanistan in the football tournament of the London Olympic Games.

The ground at this time was captured in a charming Fred Yates painting, which hangs in Hove Museum – although artistic licence shows the old West Stand actually on the eastern side.

In 1958-1960, a new "Grand Stand" was opened in two phases, but a planned third section was never built. The biggest attendance ever recorded was 36,747 against Fulham on 27 December 1958. Floodlights were inaugurated in April 1961.

In the late 1970s, as Albion rose through the divisions to reach the top-flight, the Goldstone Ground sometimes struggled to cope with enormous crowds. Fencing surrounded the pitch to combat hooliganism, a temporary "Lego Stand" was erected, the South Stand was devastated by fire, and the North Stand was demolished on safety grounds.

The club's fortunes declined thereafter, but a new North Stand was erected in 1984. This end of the ground was popular with the more vociferous fans and generated much of the match-day atmosphere. The open East Terrace was also a popular section in fair weather, and could accommodate more than 10,000 spectators at its peak.

Eventually the club board sought a new stadium at an undetermined location and the Goldstone Ground became somewhat dilapidated with its capacity reduced. Planning permission for retail warehouses was secured in 1993, with supporters assured that the ground would not be sold until a suitable alternative was found.

However, in 1995 details of a sale emerged, with only a ground-sharing arrangement at Portsmouth on offer – devastating news that precipitated a two-year battle for control of the club, with the vast majority of fans backing a takeover consortium.

The last ever game at the ground was a 1-0 win over Doncaster Rovers on 26 April 1997 in front of 11,3412 fans. Victory gave Albion the chance to avoid relegation from the football league, a chance that was successfully taken.

Following a change of ownership, Albion found a temporary home at Gillingham for two years. By the time the club returned to the city in 1999 at the Withdean Stadium, their former home had been replaced by a retail park.

The Goldstone ground was always something of a ramshackle affair, but generations of supporters came to love it. Even as the American Express Community Stadium opened at Falmer in 2011, thousands of fans still remembered the celebrations and tears, the joy and despair that became synonymous with the old ground. The fabric had gone but the memories remained.

— , -, , Information board, Sponsored by supporters of Brighton & Hove Albion FC,