From The Brighton Toy and Model Index
(Redirected from George the Fifth)
Jump to:navigation, search 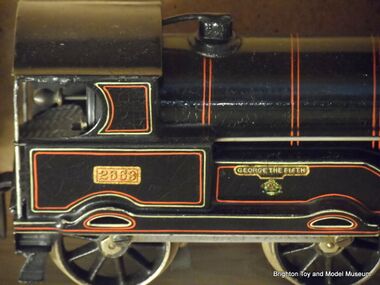 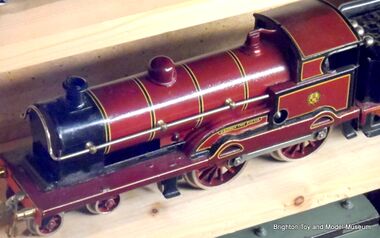 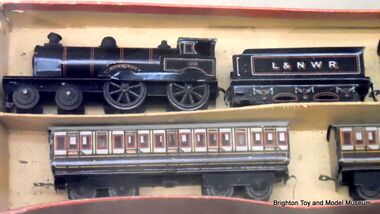 The superheated LNWR 4-4-0 locomotive number 2663, George the Fifth emerged from Crewe Works in 1910, as a superheated development of the LNWR Precursor Class, and continued to be produced until 1915.

"George the Fifth" was arguably one of the most significant locomotives in the history of steam power, as it pioneered and promoted superheating in much the same way as Stephenson's Rocket promoted "tubed" boilers - the engines proved their respective technologies so completely that from then on, almost all other locomotives followed suit.

After George the Fifth's trials, pretty much all new steam locos were designed to use superheating, and many of the older engines were retrofitted with the new technology.

Previously, steam locomotives had been built so that hot gases from the furnace passed through tubes in the boiler to heat water to boiling point, with the steam collected in a steam dome at the top of the boiler, and then fed back down through pipes to the pistons. Since water turned to steam at a given temperature (normally 100 degrees Celcius at sea level, but at a different temperature in a pressurised boiler), when this temperature was reached, the water boiled off to be collected, and didn't undergo any further heating, even though the firebox might have been operating at significantly higher temperature than the boil-point. Since the steam was at a temperature at or slightly greater tan the boil-point, it only had to lose a little thermal energy to recondense, which meant that the pistons were dealing with "wet steam" - a mixture of steam and water vapour, along with some recondensed liquid water.

Superheating eliminated these issues by the simple idea of having the firebox gases also heat the collected steam, to further raise the temperature of the steam before it reached the pistons. This created an additional expansion, gave a greater quantity of pressurised gas for the same amount of water, and meant that the steam was "dry" - which allowed pistons and valves to operate more predictably and efficiently.

The success of superheating

The success of the superheating method in George the Fifth was made obvious by the LNWR's decision to accompany the experimental 2663 with a set of ten further locos (starting with 2664 Queen Mary) that were effectively identical to George other than not having the superheating. This provided a benchmark for the standard operating characteristics of the "Queen Marys", which could then be compared directly to the behaviour of "George". The comparison showed a marked efficiency saving – George appeared to be using only about three-quarters as much coal as his siblings, for the same work.

This was a major saving in cost, and also meant that a loco could go further carrying less coal, which helped with the logistics of running a railway. George proved that superheating was a win-win-win idea that was comparatively low-tech, with no obvious downsides - more Georges were built over the next five years, the Marys were all retrofitted for superheating (turning them into Georges) and from that point on, superheating became standard in new locomotive designs, with superheating also being being retrofitted to many existing locomotives.

However, regardless of whether the Georges’ performance was "incredible" or just "really quite good" the Class established the superiority and reliability of the superheating method as a way of enhancing the efficiency of steam locomotives.

Another result of George's performance was that "compound" locomotives became less popular. Locomotives with "compound" drive mechanisms tried to extract more work from the same amount of steam by adding an additional piston stage to the the steam exhaust to make the extraction of energy more efficient. While the "compound" approach worked, it involved more complicated pistonry and because the pistons were operating at different pressures, the compound mechanisms required more sophisticated setting-up and maintenance to try to avoid uneven wear. after George, some locos had their compound mechanisms stripped and replaced with more standard mechanisms driven by steam from retrofitted superheaters.

The "George" class initially suffered from the LNWR's slightly "random" approach to numbering, with older numbers and names being recyled when their original locos were decommissioned. When the LMS inherited the LNWR's equipment in 1923, the ninety Georges were assigned new consecutive numbers in the range 5320–5409, with George receiving 5320. Eighty-one Georges were withdrawn in 1935-39, and during this period, a "2" suffix was also added, giving a nominal range of numbers from 25320–25409. Only three were left by the time that BR was formed in 1958, and these were all withdrawn before they could carry new BR numbers. 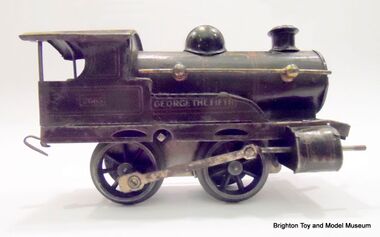 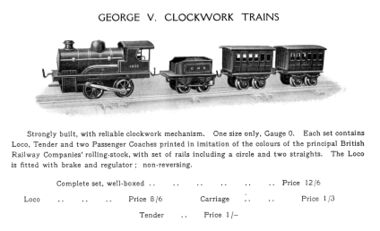 Meccano Ltd.'s "toy-ish" "George V Trains", ~1925. Note the correct curved spashguard over the drivewheels with cutout over each wheel - but the four-wheeled forward bogey has been completely omitted [image info] 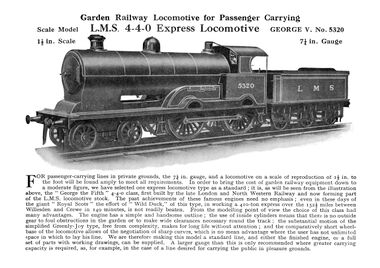 Although the "Georges" tend not to be especially remembered nowadays (since their improvements were internal, and the locos weren't the very largest, or fastest), their fame and importance at the time is evident from their popularity in the 1910s and 1920s with model-buyers - Bing and Märklin both made models of 2663, and Bassett-Lowke seem to have sold a lot of them, with the patriotic name on the loco possibly helping to soothe some buyers' qualms about buying a German-made model locomotive.

When Meccano Ltd. started making gauge 0 model trains sets in 1920, they adopted a Bing design for their cheaper lithographed 0-4-0 tinplate train, which was produced in black, red and green, with the black version being liveried as "LNWR 2663 George the Fifth". The range was briefly even named "George the Fifth trains" before being merged into the Hornby range.