The "Mountain Etat" was one of the four large locomotives singled out in the 1936 catalogue as "Scale Models". Our example is an earlier version of the model – Märklin later switched to a more complex and more standardised drive gear for the loco ... however, the simpler drive gear on this model is perhaps closer to what one might have expected to find on a real Mountain Etat. 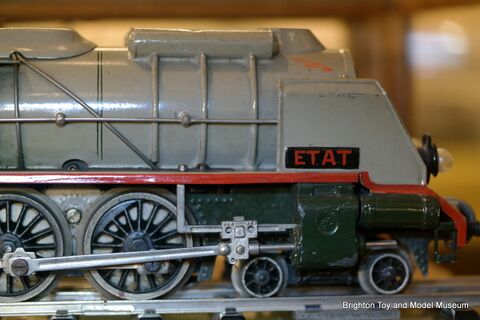 The eight drive wheels of the "Mountain" 4-8-2 configuration gave superior traction on difficult slopes. The format was introduced in the US in 1911 by the Chesapeake and Ohio Railway, whose increasing passenger service demands meant that they now needed something more powerful to haul their trains over the Allegheny Mountains region than their existing "Pacific" 4-6-2 locomotives. Locomotive manufacturer redesigned their existing Pacifics to have an additional set fo drive wheels, and the successful new class became known as the Mountain class.

French locomotive designers adopted the name, with the Chemins de fer de l'Est building a prototype 4-8-2 (known in France as a 241 based on the number of axles) in 1925, followed by another forty main-production locos in 1930.