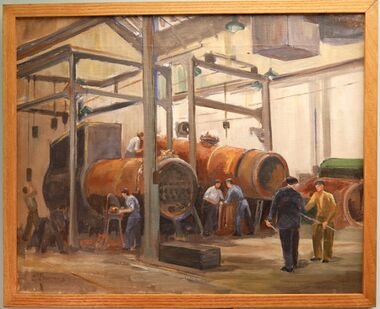 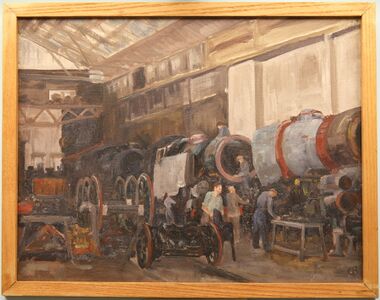 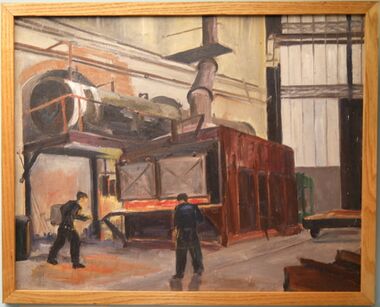 E. Burrows has three paintings of Brighton Works in the Museum's "Glamour of Brighton" exhibition.

The three paintings of the locomotive works were produced by Mrs E. Burrows in or around the late 1950s while her husband Maurice George Burrows was Works Manager at Brighton Locomotive Works. Two of the paintings are signed, "EB" and "E Burrows"

We haven't yet obtained much information on Mrs Burrows, but her husband appears in locomotive engineer biographical listings.

Maurice George Burrows, whose death occurred on 28th August 1964 in his 62nd year, was educated at Lancing College and received his technical academic training at Swindon Technical College. He served his apprenticeship from 1920 to 1925 at Swindon, entering the Drawing Office in 1925.

In 1934 he was transferred to the L.M.S. Railway as Technical Assistant, became Mechanical Inspector in 1935, eventually becoming Assistant Works Superintendent before being transferred in 1948 to the Southern Region at Brighton as Assistant to the C.M.E. for Locomotives.

In 1957 he was appointed Chief Mechanical and Electrical Engineer, North Eastern Region – the position he held when he died.

Mr. Burrows was elected and Associate Member in 1935 and he transferred to Member in 1947. He was elected a Member of Council in 1958 and continued to serve in that capacity until the date of his death.

In 1958 he presented jointly with the late A.L. Wallace, a Paper entitled "Experience with Steel Fireboxes of the Southern Region Pacific Locomotives" before the Institution.