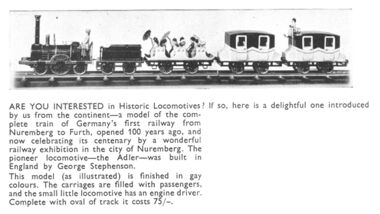 Advert placed by Bassett-Lowke in Meccano Magazine in 1935 for the model. The advert doesn't mention Märklin, and refers to the place of origin as "the continent", presumably to avoid anti-German sentiment relating to WW1 [image info]

The 2-2-2 locomotive and its tender are green and brown, and the locomotive's operating area doesn't have a roof or sidewalls.

The passenger carriages are yellow – the first passenger unit is similarly open to the elements, and the final two carriages are closed, but styled like old horse-carriages, complete with a raised seat on top where the driver of a horsedrawn cab would normally sit. 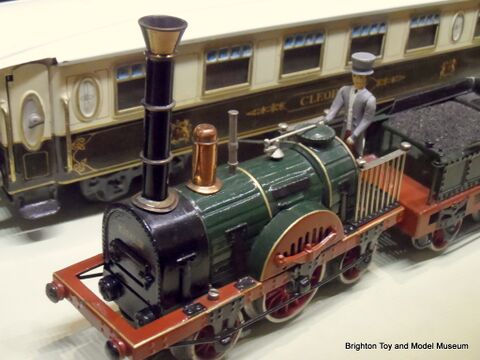 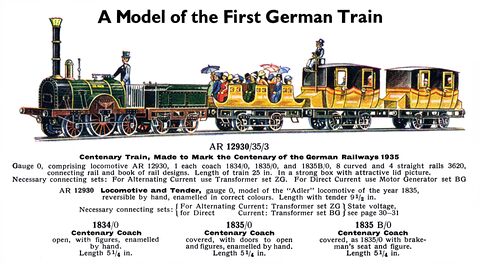 Are you interested in Historic Locomotives? If so, here is a delightful one introduced by us from the continent – a model of the complete train of Germany's first railway from Nuremberg to Furth, opened 100 years ago, and now celebrating its centenary by a wonderful railway exhibition in the city of Nuremberg. the pioneer locomotive – the Adler – was built in England by George Stephenson.

The model (as illustrated) is finished in gay colours. The carriages are filled with passengers, and the small little locomotive has an engine driver. Complete with an oval of track it costs 75/-.

Other Marklin tributes to the "Adler" locomotive

Fifty years later, in 1985, Märlklin produced another two models of the "Der Adler" train, to mark the 150th anniversary. These had catalogue numbers 5750 (the model of the original Der Adler) and 5721 (a model of the 1935 version, rebuilt after fire damage, with plainer, enclosed carriages). in ~2010, the company produced yet another version, #55175, which showed the restored locomotive in its current state.

Märklin also produced a Der Adler metal construction set as a special pack in their Märklin Metall range, based on Meccano (sold as set #1002).