It's overhead in Arch Two, by the entrance. 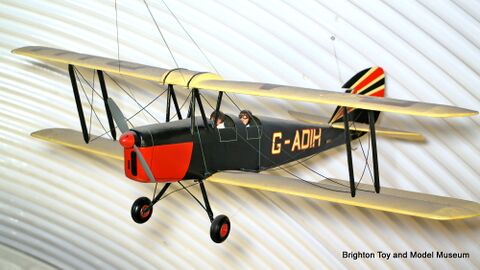 The de Havilland Tiger Moth was commissioned by the RAF as a two-seater training aircraft, being introduced into service in 1932.

A distinctive design feature of the Moths was the wing shape. It was decided that it was necessary for the occupant of the front seat to be able to bale out easily with a parachute, and to achieve this, there's a recess between the wings behind the overhead petrol tank, and the upper wing is set forward of the lower wing. In order to prevent the lift area then being set too far forward, the wings are slanted slightly, making their effective position further back along the fuselage than where they meet the aircraft's body.

The Moth's controls were very responsive, making the plane easy to fly simply, but difficult to fly well. This was a useful property for a training aircraft, as it made easier to trainers to tell which of their students had real aptitude as pilots.