A green German gauge 0 Deutsche Reichsbahn (DRG) Berlin to Munich passenger coach made by Märklin, number 19410. In classic Märklin style, the vehicle number is actually the catalogue number for the model, which in this case was 1941, with the trailing zero signifying that it was for gauge 0. 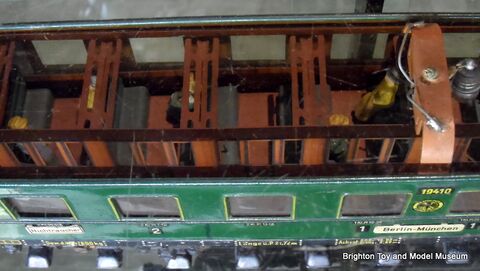 The coach was available either as the "standard" model, or as an "enhanced" version with a detailed interior (model 1941 G). This example is the "nice", "G" version with interior compartments with seating.

The coach is dark green with yellow window-lining and markings, and a removable grey roof that has been set aside to show the internal passenger compartments and individual seated passengers

The carriage has marked smoking and non-smoking sections ( "Raucher" / "Nichtraucher" ), central First Class and end Second Class sections and a plate reading "Berlin-München" below the DRG logo. Above this, a central mark reads "19410" in yellow on black, and the conventional railway markings above the wheels are accompanied by the MÄRKLIN company logo.