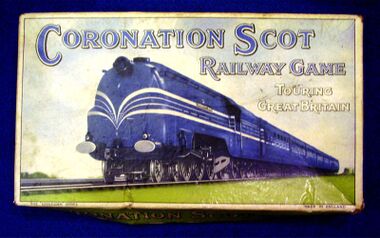 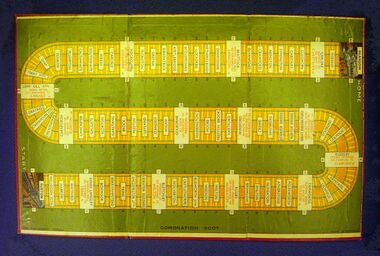 The game board folds out into three panels, with a long section of red track bent into an "S" that traverses the board three times, on a dark green background. The players take turns to throw a dice and advance their marker along the track along the eighty segments named after stations, from the start position (1, Euston) to the destination (80, Glasgow) Along the way, various positions have additional instructions that allow the player to jump further forward, or that hold them back (eg. "62. Rockliffe. Travelling well, go forward to Lockerbie 68").

The game comes with a small paper envelope which contains the dice and four playing counters, which are flat metal versions of a Coronation-class loco and tender, with an integral foot that lets them stand upright, in red, yellow, green and blue. teh paper envelope has a smaller version of the box cover art.

Online photographs of some other examples of the game seem to have an additional, smaller box to hold the counters and dice, rather than an envelope.

The lid of the box is a historical oddity, as it appears to show a Coronation-class locomotive in blue, with a headlight.

In real life, only one locomotive in the series was ever (temporarily) fitted with a headlight, and that was the 6229 Duchess of Hamilton, when it was sent to the USA for a promotional tour (masquerading as 6220 Coronation), for which it needed to be fitted with a headlight and large bell to satisfy US railway regulations. However, when 6229 was sent on the US tour, it was red with gold banding, not blue.

This seems to be a black and white promotional photograph of the red train which has then been colourised blue for the box art.

Harlesden is an area in Northwest London.

The brand name appears on a range of generic boardgames produced in the 1940s, such as Tiddley-winks, Ludo and Draughts, and also appears on some tie-in games designed to capitalise on then-current topics of public interest, such as their "Queen Mary" boardgame.

The game was recently re-issued by Ecotronic, with smaller, more squarish and more stylised wooden markers rather than the original long painted metal ones, and with some modifications to the box lid artwork.