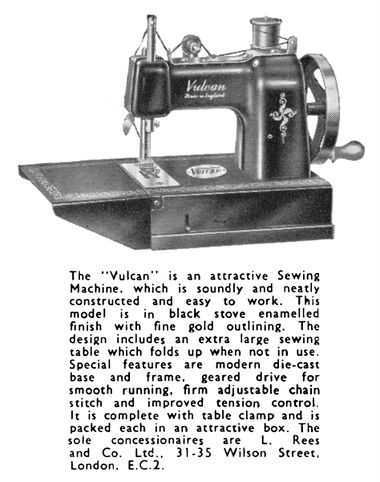 1955: The second main unnamed version of the Vulcan sewing machine, generally referred to as the "Featherweight") [image info] 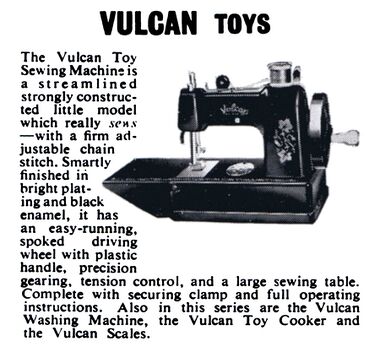 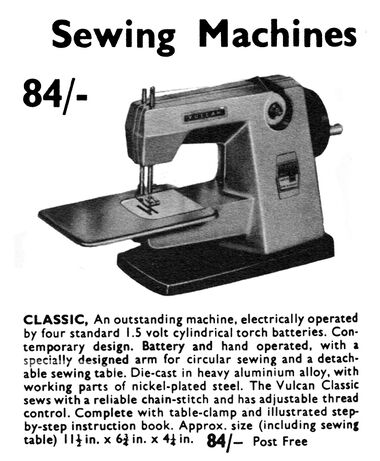 The Vulcan toy sewing machine brand was owned by Sydney S. Bird, who manufactured in Poole, Dorset, at the Cyldon Works.

Bird purchased two existing small toymaking companies, Prestioco and Morthan, and then started producing electronic goods under the brandname Cyldon (named after his two sons, Cyril and Donald), and toys under the brandname Vulcan. The Cyldon name was also used for a range of model stationary steam engines between 1947 and 1951. 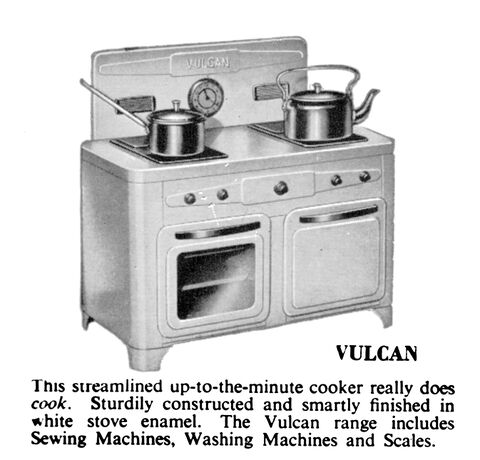 The Vulcan sewing machines were distributed in the 1950s by Leon Rees, who owned Chiltern Toys and the Amersham brand.

The original Vulcan (now generally known as the "mk1") was, like some other popular toy sewing machines of the period, obviously based on the design of the Singer 20. This was followed by another Vulcan inspired by the wedge-shaped table of the "Singer Featherweight", and a more substantial-looking but less elegant Vulcan normally referred to as "Dumpy" (!).

The "Vulcan" is an attractive Sewing Machine, which is soundly and neatly constructed and easy to work. This model is in black stove enamelled finish with fine gold outlining. The design includes an extra large sewing table which folds up when not in use. Special features are modern die-cast base and frame, geared drive for smooth running, firm adjustable chain stitch and improved tension control.
It is complete with table clamp and is packed in an attractive box. The sole concessionaires are L. Rees and Co. Ltd., 31-35 Wilson Street, London E.C.2.

These were followed in the mid-to-late 1950s by a range of three budget machines with actual names, the Minor, Junior and Senior, and then the nicer-running Countess, and the battery-powered Classic and Regal.