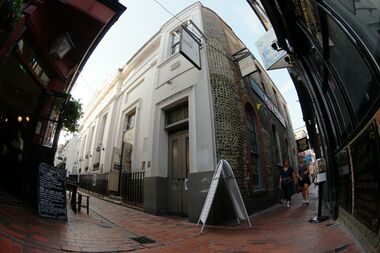 2018: "Fisheye lens" photo, showing the cramped surroundings, and the difficulty of getting a representative image of the building [image info]

2018 rough 3D "computer model" recreation of the building, based only on images taken very close by, at street level. A more complete model would require additional photos taken from higher up, to correctly model the roof and upper windowsills. [image info]

Although there was a Union Chapel before it, the current building of Union Chapel, Brighton (also known as Union Street Chapel) was built in 1825, by one or more members of the Busby/Wilds partnership, during the period (1820s) in which the partners were putting up buildings all around Brighton, Hove and Kemp Town. The earlier chapel that it replaced was built in the late seventeenth Century. Exactly which architect(s) were involved with the original is disputed.

The building has not been a church for some time, and is currently a bar called The Font.

The white front of the building is a wierd hybrid of Greek and Egyptian influences: it's styled with Greek temple influences, but with tapered windows that look Egyptian - this is typical of 1820's architecture when the craze for anything Egyptian led to Egyptian-looking features being included in a range of anomalous contexts (including Brighton's cast iron and wrought iron Chain Pier - essentially a "classical Egyptian" British industrial revolution suspension bridge!).

The right-hand side of the building is brownish flint.

The passageways of The Lanes that run past the front and side of the building are so narrow that it's actually quite difficult to fully appreciate or see the building – one can't step back far enough away from the front to be able to properly see the whole thing, which means that details such as the tapering windows are normally pretty much lost to a casual passer-by.

This Chapel, which has recently undergone considerable alteration and enlargement, was first built soon after the Glorious Revolution of 1688, and for upwards of one hundred years continued in the hands of the Presbyterians. It now belongs to a congregation of Dissenters, of the Independent Denomination. Since its first erection it has undergone several alterations and additions; the principal one took place in 1810, but during the summer of the present year it has been taken down, and a splendid building erected upon its ruins; it is now capable of seating nearly 1000 persons. The interior, which is in the form of an Amphitheatre, displays considerable taste and elegance. The galleries are supported by pillars of the Corinthian order; it is now one of the most elegant Chapels in Brighton, and confers great honour upon the ingenious Architect, Mr. H. Wild. It is lighted with gas, and has a good organ. The Rev. J.N. Goulty has recently succeeded the Rev. Dr. Styles as stated Pastor. Times of Service, on the Sunday Morning at Eleven, Evening at half-past Six; in the Week, Monday and Friday Evenings, at Seven o'Clock.