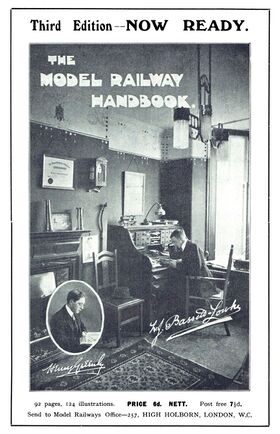 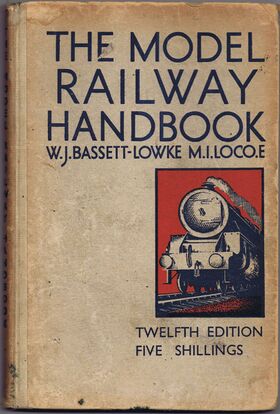 The Model Railway Handbook, 12th edition (1942). By this time the book is no longer "The Sixpenny Handbook", and costs five shillings. [image info] 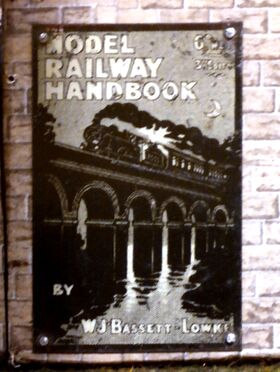 W.J. Bassett-Lowke's The Model Railway Handbook (sometimes referred to as The Sixpenny Handbook) first appeared in 1906, and went through a large number of editions.

Initially, the book was revised almost yearly (with the third edition of 92 pages being advertised in December 1909), but as it matured, updates became less frequent.

W.J. Bassett-Lowke and his friends produced significant numbers of articles for the limited number of model railway publications that were available at the time, and it probably seemed obvious, given the success of Henry and WJ's foray into "homebrew" publishing with their catalogues, to produce a proper book that would act as a repository for their work and a general reference work for the subject, allow them editorial freedom, and promote their own brand rather than someone else's. Naturally, the book featured a certain amount of imagery and references to B-L products, projects and people. 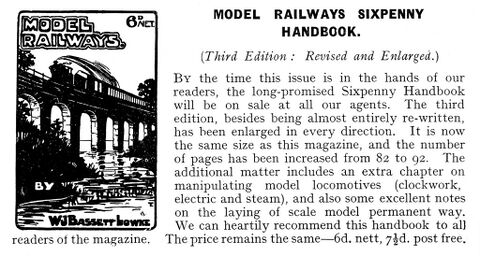 1909 advert for the third edition of the handbook, from Model Railways and Locomotives magazine. Confusingly, the artwork doesn't seem to include the word "Handbook".

1924 advert for the Seventh Edition of the Handbook

As this was W.J.'s project (and as the book was also helping to publicise the Bassett-Lowke brandname), W.J.'s name appeared on the cover, although early advertising shows Greenly's picture and signature as well as W.J.'s.

WJ's attitude to crediting other people's work seems to have been similar to Walt Disney's, in that he seems to have taken the position that the important thing, publicity-wise, was to promote the brand rather than the individual authors. Like "Disney's" cartoons, the handbook showcased a single name, although it wasn't made entirely clear that W.J. wasn't the sole author of "his" book, by a long shot. Other writers who are reckoned to have contributed articles (sometimes individually recognisable), are Henry Greenly, George Winteringham and Cecil J. Allen, with cover art by Allen ("CJA"), Kenneth H. Cullen, and Ernest Twining, successively.

As with Disney, W.J.'s attitude that personal "creator" credits were petty and unnecessary probably raised a few eyebrows due to his habit of making sure that his own name was prominently featured almost everywhere, and this is supposed to have occasionally been the cause of some resentment and friction between WJ and his friends. 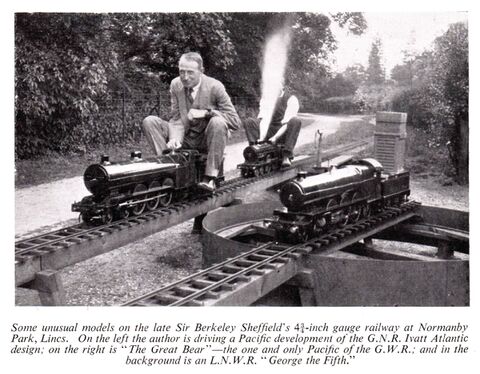 An illustration from the Model Railway Handbook. W.J. is clearly visible and credited as "the author" ... the other person in the photo, unknown and uncredited, has their face "unfortunately" obscured by a blast of steam. One can imagine that the second person, perhaps excited at the chance of being photographed with W.J., might have been somewhat disappointed by the choice of shot. The individual locos, however, are all credited.