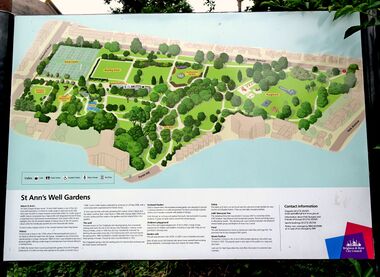 2014: The park's map and information board [image info] 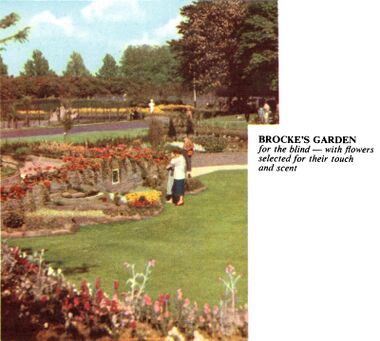 ~1961: Brocke's Garden for the Blind, now more commonly referred to as "The Enclosed Garden", or "The Sensory Garden" [image info] 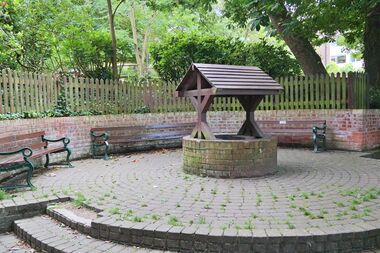 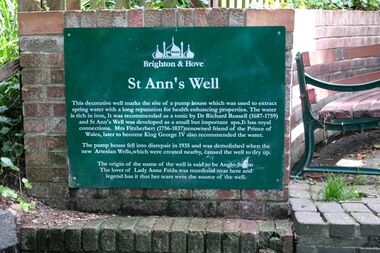 Information board for The Well [image info] 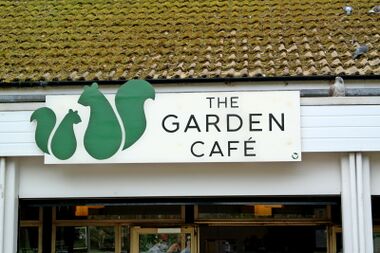 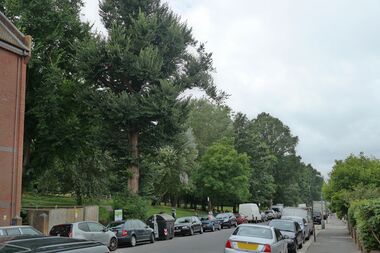 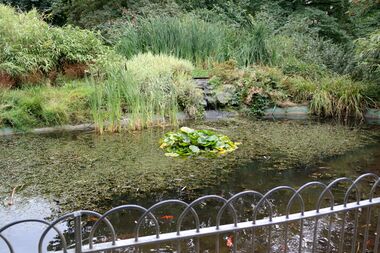 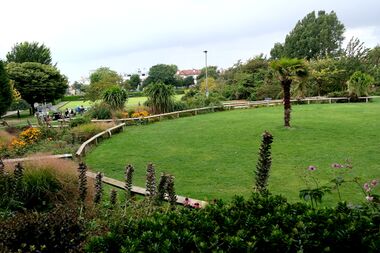 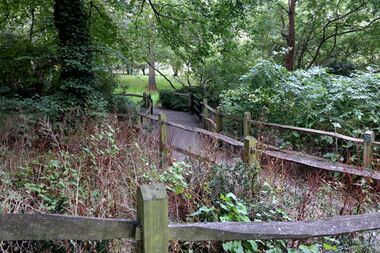 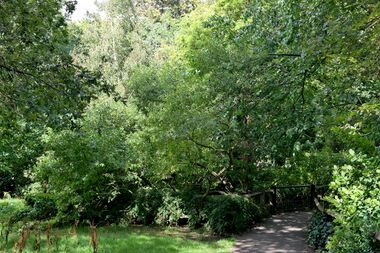 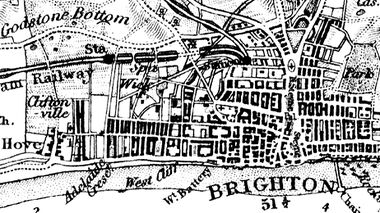 St Ann's Well Gardens in Hove grew up around St Ann's Well, an iron-rich spring recommended by Dr. Richard Russell that helped create the health craze that gave Brighton it's first wave of tourism-related visitors, before the arrival of the Prince Regent, the construction of the piers, and the arrival of the railway.

The park was acquired by the Council and opened to the public in in 1908. It is a nice mixture of the highly ordered and genteel (tennis courts, bowling green), and wilder-feeling areas that encourage squirrels and other wildlife.

This decorative well marks the site of a pump house which was used to extract spring water with a long reputation for health enhancing properties. The water is rich in iron: it was recommended as a tonic by Dr. Richard Russell (1687-1759) and St Ann's Well was developed as a small but important spa. It has royal connections: Mrs. Fitzherbert (1756-1837), renowned friend of the Prince of Wales, later to become King George IV, also recommended the water.

The pump house fell into disrepair in 1935 and was demolished when the new Artesian Wells, which were created nearby, caused the well to dry up.

The origin of the name of the well is said to be Anglo-Saxon. The lover of Lady Ann Frida was murdered near here and legend has it that her tears were the source of the well.

The walk to this fashionable resort, adds to the many pleasing varieties of Brighton. The carriage way commencing either at the end of Brunswick Terrace, or by the New Road, at the end of Western Place; the footpath commences opposite the Workhouse extending across the fields by the Temple, from which, at the distance of a quarter of a mile, is this far famed

Which issues from the declivity of a little hill, half a mile west from the town. The overflowmg of this Spring, and the ochrous sediment which was observed in the reservoir, and the colour of this sediment, induced many persons to speak of this as a Mineral Spring. A gentleman residing here for the benefit of his health, tried its efficacy on himself, and presently felt the most astonishing benefit from it. This circumstance being generally known, induced others to try with similar success; the Proprietor, therefore, enclosed the Spring with a brick wall, sunk an iron pot pierced with holes for the water to come in at, and covered the top to prevent dirt, &c. from injuring it, at the same time leaving a free passage for the overflowing water to empty itself into a receptacle for this purpose.

Dr Henderson gives the following account of this water: –

" When first taken from the Spring in a glass, it has an appearance greatly resembling a solution of emetic Tartar in common water, the taste is not unpleasant, something like that of a knife after cutting lemons. It does not seem to contain the smallest portion of sulphur; it neither changes vegetable blues red, nor does it effervesce with alkaline salts, calcareous earths, magnesia, or fossil alkali, yet it curdles soap, and renders a solution of various spirits milky. It seems to contain a considerable portion of calcareous earth, mixed with vitriolic acid, in the form of its selenities, and also a considerable portion of iron, as will appear from the following experiment:– Sixty-four ounces of this water, by measure, being evaporated to dryness, there was a residuum of a brownish colour, full of spiculae, weighing four grains, eight ounces of which, with an equal quantity of charcoal, was made into paste with oil, and calcined; on trying the calcined matter with the magnet, two pieces nearly in the metallic form adhered to it, and when put upon paper at the distance of half an inch, moved in every direction with the magnet; these two pieces weighed one eighth of a grain. The gross residuum neither effervesces with alkalies nor acids, and is sufficiently soluble in water; this water becomes instantly transparent on the addition of any of the mineral acids, especially the vitriolic. A solution of galls in common water, added to an equal portion of this water, becomes black like ink in a few minutes. The Chalybeate has been found serviceable in several cases of general debility, Indigestion, Atony of the Stomach, Flour Albus, and in all these diseases where chalybeate and tonic remedies are required, it promises, under due regulations, to be useful. "

At Wick, half a mile westward of the town, is a medicinal spring, which issues from the declivity of a little hill, and has of late years been much frequented. It has been found useful in cases of debility and indigestion; a picturesque Swiss cottage adjoins the Spring, where refreshements may be had.

, are on Furze Hill, adjoining Lansdowne Road, near the top of Brunswick Place. Here is the chalybeate spring which did so much to spread the fame of Brighton as a health resort. The medicinal properties of the waters are similar to those at Tunbridge Wells, but stronger. The beautiful grounds of about 11 acres were taken over by the Hove Council in 1908. They are tastefully planned and in parts wooded with chestnut and fir trees.

"An oasis of peace all year round", St Ann's Well Gardens is one of the city's most well loved parks. It is home to a wide range of native and exotic trees which give the park its unique character and provide shelter for a wide range of wildlife. Nature conservation has a high profile with designated fenced off areas, a streambed and a well stocked ornamental pond. Each season offers its own highlights from the fantastic displays of spring crocus to the rich autumn colours while the friendly grey squirrels are a firm favourite with visitors.

St Ann's rose to fame in the 1700's when Dr Richard Russell sent some of his clients to drink the water from the Spring – heralded as one of the finest natural springs in Europe. During the 1880's St Anns was restored to become a pleasure garden offering a wide range of entertainment from fortune telling to a monkey house.

In 1908, the former Hove Council purchased the gardens from Mr d'Avigdor Goldsmid for £10,000 and they were opened to the public on Empire Day in 1908. St Ann's Well Gardens celebrated its centenary on 24 May 2008, with a community event organised by the Friends Group.

St Ann's also has links with early pioneering film makers. Esme Collings shot the oldest surviving "blue" movie there in 1896 while George Albert Smith built his own camera and film studio in the gardens and shot several films in the gardens.

Formerly known as The Chalybeate (iron bearing) spring, this ornamental wishing well marks the site of the old spa. Mrs Fitzherbert, "mistress" to the Prince of Wales wrote in 1830 how she was "wonderfully improved" by drinking the spa waters every day. A furnished pump room was built around the spring and in 1882 the Brighton Gazette reported that it was one of the finest springs in Europe. The pump room was demolished in 1935.

The Chalybeate spring is also the starting point of a ley line that continues over the South Downs and beyond.

Once a croquet lawn, the enclosed scented garden was designed to provide a "sensory experience in a safe environment" for blind and visually impaired visitors, but is equally as popular with people of all ages.

Enter through an archway and explore the touch, feel and smell of a variety of plants. A guide rail leads visitors around the central square.

One of the city's largest playgrounds, St. Ann's offers a range of play experiences for children and toddlers, including a huge slide. Dogs are not permitted in the play area.

The toilets at St Ann's can be found near the cafe and include facilities for men, women and disabled visitors. There are also baby changing facilities.

Ths weeping cherry tree was planted in 2007 to remember all the LGBT (Lesbian, Gay, Bisexual and Transgender) people, friends and family lost to or affected by suicide. The planting was a joint initiative between the MindOUT mental health group and Brighton & Hove City Council.

The well stocked pond is home to spectacular water lilies and huge fish. The pond also has its own biological filter system.

The pavilion is home to the St Anne's Well Gardens Bowling Club which was formed in 1920. This popular green is also open to the public on a "pay and play" basis.

Look out for Open Days when the club offers free tuition for potential new members.