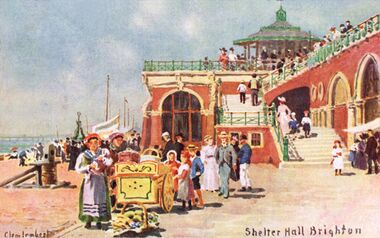 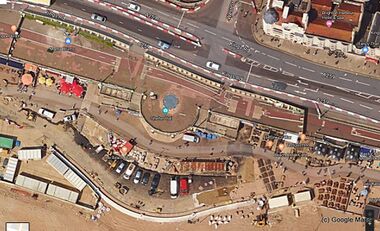 ~2014-2016: Aerial/satellite view of Shelter Hall, Brighton, and the two flanking stairways, courtesy of Google Maps. The image shows the road-rerouting that took place after the 2014 structural failure under the roadway, but doesn't yet show the subsequent cordoning off and demolition of the rotunda, that happened in around 2016-2017-ish. [image info] 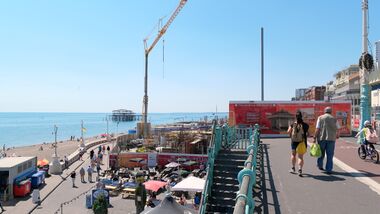 2018: Shelter Hall site, some time after the demolition of the Rotunda [image info] 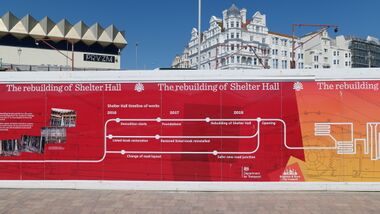 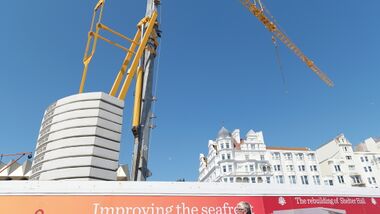 Brighton's Shelter Hall and Rotunda was built in the 1880s, and juts out from the road wall a little to the West of the Palace Pier, at the bottom of West Street. As of 2018 it is in the process of being completely rebuilt.

The gym that had occupied the site vacated in 2013 when the space was deemed unsafe, after which the Shelter was effectively left derelict. Some road subsidence in (2015?) that caused road closures prompted further investigations that revealed the extent to which the structure behind the rotunda had decayed - the space needed to be completely demolished and rebuilt to properly support the road. This meant that the rebuilding project would be partly funded by the Department for Transport.

Surveys showed that the the underchalk had also badly deteriorated, meaning that a new set of defensive piles needed to be set outside the structure, to ensure that whatever was rebuilt on the site wouldn't then have a tendency to slip outward and downward towards the sea.

After some emergency work in 2015, a survey concluded that although the upper "kiosk" (which originally functioned as a glorified skylight for the space beneath) was to be preserved, the rest of the site had no real archaeological significance. While it was obviously preferable to rebuild the site as-was to preserve the look and feel of this section of seafront, it was difficult to justify spending quite a lot of money to produce an exact recreation of a building that had in some ways been quite flawed in terms of its usablity. The decision was made to rebuild the rotunda in a way that made it look like the original, but larger and jutting further out from the seafront, so that the investment in rebuilding would produce significantly more rentable space and be more of an asset to the seafront than the original building.

A shelter hall is a seafront building that gives people somewhere pleasant to be if the weather is being inhospitable. Another shelter hall was built under the Madeira Lift, and is now the Concorde 2 venue. Consequently, the name "shelter hall" now only tends to be used to refer to the Western rotunda and its attached spaces and architecture.

The Rebuilding of Shelter Hall

The Shelter Hall is being entirely rebuilt. This is vital because it is structurally unsafe and beyond repair – a serious matter since it helps support the seafront road and upper prom. The new building will have space for businesses, helping pay for the upkeep of this part of the seafront into the future.

Shifting the Hall will create more useful space inside and enable the council to improve the look and pedestrian environment of the busy West Street junction. This will be remodelled to ease congestion, with smart signalling which monitors vehicle queues and responds automatically

It is expected the project will take around two and a half years to complete, having started in January 2016.

Rebuilding has been paid for by a £9m grant from the Department for Transport's Challenge Fund, plus £1.7m from Brighton & Hove City Council.

When rebuilt, the Shelter Hall will be moved a few metres nearer the sea and protected by a new sea wall with foundations sunk several metres deep.

The Grade II listed Shelter Hall kiosk, built in the late 1880s, has been dismantled for repair off-site. The Kiosk will be fully restored and relocated as part of plans to rebuild the Shelter Hall below.

Originally a light well lantern to the Shelter Hall, over the years the kiosk had lost this function. A concrete floor was installed, blocking light from the Hall and the structure was turned into a commercial kiosk.

The council's restoration will re-instate lost metalwork and joinery, which will be handcrafted to match the originals.