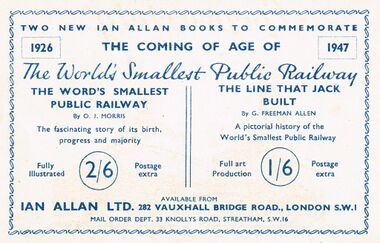 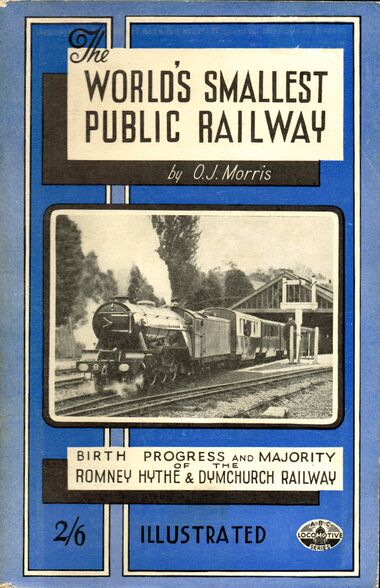 The Romney, Hythe & Dymchurch miniature railway ("RH&DR") is a 15-inch gauge miniature railway in Kent, running parallel to the coastline from Hythe (a little south of Folkestone) to the Dungeness promontory. It opened in its initial configuration in 1927.

The railway was the brainchild of two racing drivers, John Edwards Presgrave Howey and Count Zborowski the Younger. Howey already had a 1915 4-6-2 Bassett-Lowke locomotive Colossus in his garden on a short stretch of track, and the industrial narrowgauge Ravenglass and Eskdale Railway had already been converted to 15-inch gauge (by WJ Bassett-Lowke and Robert Proctor-Mitchell), and reopened in 1915 as a miniature railway, creating a kind of precedent.

The stretch of land between Hythe and Dungeness was comparatively undeveloped, and the Southern Railway already had services to both ends of the projected route, so the new line could function as a useful connecting service, or customers could arrive by rail at one terminus, travel the length of the miniature railway, and then take a full-sized train home again from the other end.

The first ~eight-mile stretch of the railway from New Romney to Hythe was completed in Summer 1927, and the extension to Dungeness in 1928-1929.

After World War Two, the railway's reopening ceremony on 21st March 1947 was presided over by Laurel and Hardy.

CONSTRUCTED under a Light Railway Order dated May, 1926, the Romney, Hythe & Dymchurch Railway was projected by and is being built under the oversight of Capt. J.E.P. Howey, the well-known racing motorist, who is the principal shareholder and deputy chairman of the company. General Sir Ivor Maxse, K.C.B., C.V.O., D.S.O., is chairman, and the other directors are Messrs. A.J.J. Lucas, K. Lee Guiness, H. Greenly and Major W. Bertram Bell, J.P. Construction is well advanced, though it has not been found practicable, in view of the short time which has elapsed since the Light Railway Order was obtained to open it in time for this summer's traffic. Mr. Henry Greenly, A.I.Loco.E., is engineer and manager. Mr. Robert Hardie is traffic manager, and Capt. Harvey is in charge of the motor power department.

The railway is of 15-in, gauge, and, as may be seen by reference to the map reproduced herewith, when completed will connect at New Romney with the branch off the Hastings line from Appledore Junction. On the way from New Romney to Hythe, a distance of 8¼ miles, the line gives access to the fine stretch of sands at Dymchurch, which will thus be connected by rail with London and so add to the long list of attractive holiday resorts served directly or indirectly by the Southern Railway.

The whole 8¼ miles of line are to be double-tracked and siding accommodation is provided at the termini and at certain intermediate stations:-

"New Romney" (the main terminus)
with four passenger roads, loco. and works buildings, turntable, carriage shed, and extensive goods yard. It is intended to arrange for the Southern Railway to extend their line into the R.H. & D. Railway yard for purposes of goods transfer.
"Holiday Camp,"
near Jesson Farm, adjacent to Messrs. Allnatt's childrens' holiday-camp. This camp is also known as the Duke of York's Summer Camp.
"Dymchurch (for Marshlands)"
adjacent to the St. Mary's and Bonnington Roads and to the Marshlands Hotel near to the western end of this resort. The Romney, Hythe & Dymchurch Railway will bring Dymchurch into direct communication with London.
"Dymchurch (Dymchurch Bay and Burmarsh)."
A halt at the eastern end of Dymchurch on the road to Burmarsh village. From here the line passes under the shadow of Lympne Castle close to the hills under the West Hythe Road to Hythe alongside the southern bank of the Military Canal.
"Hythe (Ashford Road)."
This terminus is close to H.M. School of Musketry and near to the Folkestone Omnibus terminus.

Work on the undertaking has been in progress for some time from the New Romney end, and it is anticipated that the line will be finished as far as Dymchurch at the end of this summer, and the whole completed and opened within the next twelve months. The Southern Railway are extending their line across the Littlestone Road into the R. & H.D. Railway yard.

The locomotive stock is to consist of three two-cylinder Pacific type locomotives, two three-cylinder "Pacifics" and two 4-8-2 type locomotives. So far two of the two-cylinder Pacifics, Green Goddess and Northern Chief, have been delivered. These were constructed by Davey Paxman & Co. Ltd., of Colchester, and are somewhat similar to Mr. Gresley's L.N.E.R. (G.N.) Pacifics, except that bogie tenders are employed. The locomotive stock will be completed by a four-wheeled goods and shunting engine of special design.

The standard passenger locos weigh upwards of 8 tons. They will haul in regular service a train of 25 carriages at 30 m.p.h. with ease. The cylinders are 5¼ in. bore by 8½ in. stroke. The driving wheels of the express Pacific type engines measure 25½ in. diam. and 19½ in. diam. for the eight-coupled engines. In length the engines and tender total 25 ft. and a complete train 275 ft. Automatic vacuum brakes will be used.

Semi-open and closed carriages are being supplied. Sixty of the former, each capable of carrying eight adults, are now being constructed and for the winter traffic the closed cars will be installed. Goods wagons of various types according to the needs of the traffc are under consideration; at present six one-ton trucks have been delivered.

The designs for the locomotives, surveying of the road, and the architectural work have all been prepared by Mr. Henry Greenly.

Several main drainage canals and innumeral dykes have to be crossed in the course of the eight miles. The largest of these is adjacent to the Duke York's Camp at Jesson. The bridge is a single 56 ft. span skew "N" type girder bridge resting on reinforced concrete abutments. The road bridge at The Warren, New Romney, has two 50 ft. tunnels and was built in reinforced concrete in 5½ weeks. The line will completed by a special extension of the Southern Railway into the R.H. & D Railway Company's yard.

H.R.H. The Duke of York, in visiting his camp on August 5, expressed a desire to see the line. Efforts were made to complete the 56 ft. span girder bridge which connected up New Romney with the boys' camp before the appointed day. This feat was accomplished and the Duke was able to cross the bridge and drive the first train to New Romney. The line is, of course, not officially opened but the royal "christening" is an indication of the interest taken in Captain Howey's venture. Mr. H.N. Gresley, C.B.E., of the L.N.E.R. was present and rode on the locomotive with Captain Howey, the Duke driving. On the train were a distinguished party of one hundred of the Duke's friends and guests, including Mr. R.R. Hyde, who superintends the camp, Sir Arthur Steel-Maitland, Minister of Labour, Sir Max Bonn, Sir Phillip Gibbs, Sir Charles Wakefield and Captain Paterson. Both the Duke and Mr. Gresley expressed thorough enjoyment of the trip and were well satisfied with the performance of the locomotive and the equipment generally.