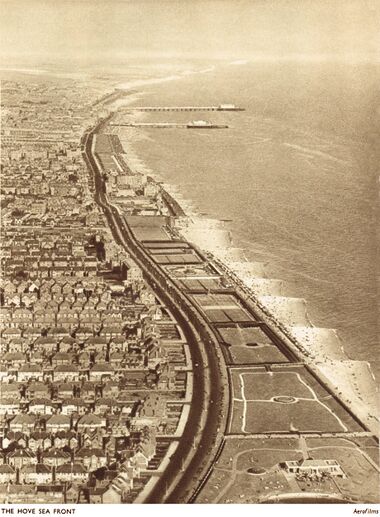 1936: aerial view of Hove seafront with the West Pier and Palace Pier in the background (photo credit: Aerofilms) [image info] 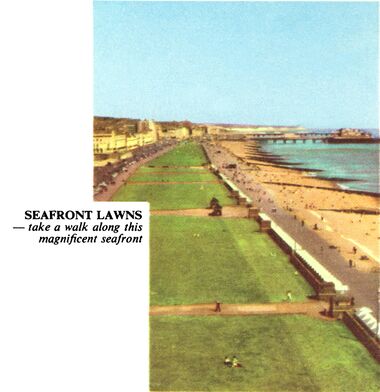 Hove Lawns is a sequence of grassed rectangular spaces extending along the seafront westwards from the Brighton/Hove border.

Our research for the Hove Lagoon page suggests that the land for the Lawns (which were already being used as public spaces at least as far back as the 1880s) may have been fully assembled and organised in the late 1920s, and their new status formalised in 1930 after the final legal complications with Hove Lagoon had been sorted out (Hove Lagoon had additional legal complications due to its being arguably part of a river-mouth, introducing issues as to the separate legal ownership of land defined as being part of the Adur's riverbanks).

Westward of the statue is –

, a spacious promenade upward of a mile in length. On one side is a row of well-kept lawns and gardens, backed by terraces of stately mansions; on the other the sea, dashing at high tide right up to the parapet. The construction of the Hove sea-wall cost over £40,000, and further works have recently been carried out near the Baths. No watering-place in the world can show a finer promenade than this, wrested, be it remembered, from the ocean itself. The Lawns in front of Brunswick Square and Adelaide Crescent have taken the place which the Steines held in the Prince Regent's time as the fashionable promenade of Brighton. The Sunday "Church Parade", with its display of beautiful toilettes, is of unfailing interest.

The former break in the Esplanade was happily remedied in 1909, when the Corporation, by securing strips of the gardens fronting Brunswick Terrace, threw open the whole length of the sea-front in one stately thoroughfare, of which the Eastern portion is known as the Hove Sea Wall, and the western portion as the King's Esplanade. The promenade, having been extended to Aldrington, forms a continuous seaside terrace over a mile in length, and, being some distance from the main road, is free from the din of vehicular traffic.