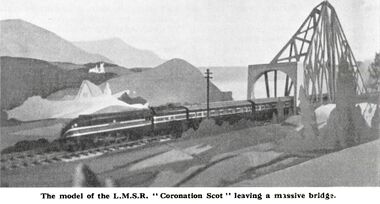 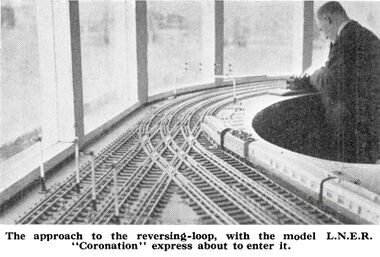 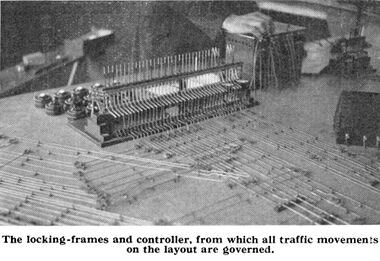 The Glasgow 1938 Empire Exhibition included a Britsh Railways Pavilion, with a large gauge 0 layout showcasing one passenger train from each of the "Big Four" railways companies, along with goods trains.

The layout, built for the exhibition by Bassett-Lowke, was so impressive that a derivative version was later installed, with the same model trains, at a London tube station as a public display.

The display featured one passenger train from each of the "Big Four" railway companies, along with a goodsyard with goods trains, all supplied and installed by Bassett-Lowke.

The museum collection effectively holds two out of the four Glasgow Exhibition passenger trains: we have a Bassett-Lowke complete nine-car set of the LMS "Coronation Scot" train, identical to the one that was on display at the exhibition ... we also have the actual original "one-off" train of carriages for the streamlined LNER "The Coronation" train, that was specially created by or for Bassett-Lowke for the display.

According to reviews, the passenger trains featured were:

What was the Southern train?

Some contemporary reports mention a Brighton Belle model, and others say that the SR passenger train was a Southern Belle. We think that the confusion is due to Southern's renamings, and that the layout may have actually featured a green Porsmouth 4-COR corridor EMU, as this would have been something that the SR would have wanted to promote (the Portsmouth line having only just been fully electrified, in 1937).

If so, the "Southern Belle" referred to was the green Portsmouth train. Given that it's difficult to find photos of the "Southern" model in the Glasgow publicity materials, and that most of the reports of the layout seem to have been rewritten from the publicity materials by reporters who may not have actually visited the Exhibition themselves, we think that some writers may have thought that Southern was referring to the London-Brighton electric service, and may have then wrongly "updated" the name to "Brighton Belle", without realising that a different train was being referred to.

THE British Railways' Pavilion has a high circular hall, nearly forty feet in diameter, made almost completely of glass, and is topped by a tall mast encircled by four parallel lines, symbolic of the four railways and bearing their initials. These lines extend to the top of the mast and are illuminated at night to form moving spirals of coloured light.

Outstanding exhibits in the pavilion are a series of sectionised coaches of each of the four British mainline railways, and an electric working model railway, 140 feet long, passing through a diorama representing typical English, Scottish and Welsh scenery. Running on the model railway are scale-built trains, one for each Company – “The Coronation Scot” (LMS), “The Coronation” (LNER), “The Cornish Riviera Express” (GWR) and “The Southern Belle” (SR). At one end of the model railway, which runs around a circular gallery, is a complete model goods marshalling yard in which all the principal operations in the working of goods traffic are conducted in miniature. The model railway is controlled from a switch-panel by a hidden operator, and it is signalled throughout in accordance with the latest railway practice.

In the pavilion is an inquiry bureau, in which complete travel information and reservation services are available.

Models to Interest the Railway Enthusiast at the Empire Exhibition, Glasgow, 1938

AT all exhibitions use is made of the miniature in display and publicity, and we understand the Empire Exhibition at Glasgow will be no exception to this rule.

Messrs. Bassett-Lowke, Ltd., of Northampton, will be represented with some fine examples of their exhibition work. A model representing a block of the earth's surface about 600 ft. deep will show, to scale, the coal seams, the way these are worked, and the many processes the coal goes through before it is ready for transport on the railways. The model is to a scale of 1/4" to the foot, and will be an attraction in the Government Pavilion.

To model railway enthusiasts, probably, the most interesting exhibit will be in the British Railways Pavilion, for which Messrs. Bassett-Lowke, Ltd., have been designing and constructing a working model railway. This consists of over 600 ft. of track, with points, crossings, and other rail details. The track will be laid in the form of a large arc in the most prominent position in the Pavilion the operating section will be at one end, and a return curve at the other. The line will pass through a background of specially constructed scenery representing typical districts which each railway company serves. The track will be l 1/4" gauge, electrically operated and controlled, and the main line will be signalled by automatic colour-light signals; but, at the operating end, where the trains are marshalled and the sidings situated, the upper-quadrant Semaphore type will be used.

A complete passenger train of each company will be shown, the models being as follows: L.M.S. " CORONATION SCOT,­ L.N.E.R. " CORONATION," G.W. R. " Cornish Riviera Express," drawn by the locomotive "KING GEORGE V."; the S.R. will show their latest development in electric traction — the all-electric "BRIGHTON BELLE." In addition to these passenger trains, there will be examples of goods trains and rolling stock of each of the companies, and, from the advance information we have, the whole lay-out should be a most attractive and comprehensive exhibit.

A Model Railway at the Empire Exhibition

IN the British Railways Pavilion at the Empire Exhibition, Glasgow, there is a fairly elaborate layout on which representative models of famous British trains operate at frequent intervals. The layout and all its equipment was constructed by Messrs. Bassett-Lowke Ltd., and the photographs reproduced herewith show some of the more interesting features. One of the pictures shows the signal lever-frames and controls. The larger frame operates the incoming points and signals, while the smaller frame governs the points and signals for the outgoing trains at the terminus. The controller governs the speed and direction of trains on various sections of the layout. There is an illuminated diagram which indicates to the operator the positions of all trains running on the layou; this was necessary because, for most of the time the trains are in motion, they are out of sight of the operator.

Another photograph shows the model of the L.N.E.R. "Coronation" approaching the reversing-loop, and gives an excellent idea of the track-work at this point. In the background can be seen a gantry of upper-quadrant signals, used for trains backing into the sidings. The rolling stock consists of models of passenger and freight trains, representative of each of the four British Railways. The L.N.E.R. Coronation," the L.M.S.R. "Coronation Scot," the G.W.R. "Cornish Riviera Express," and the S.R. "Brighton Belle," are all reproduced in miniature. In addition to these, some freight trains are included.