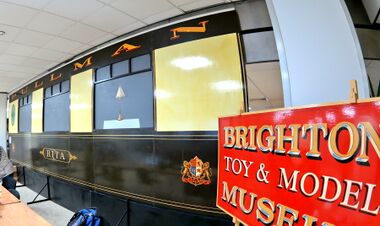 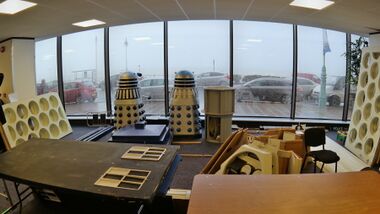 A pair of Daleks watch the traffic while waiting for the rain to stop, ModelWorld 2015 setup [image info] 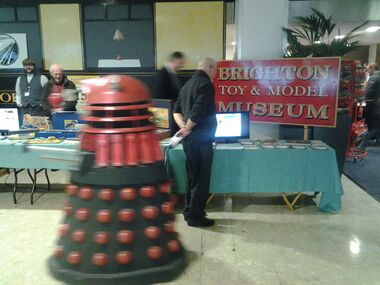 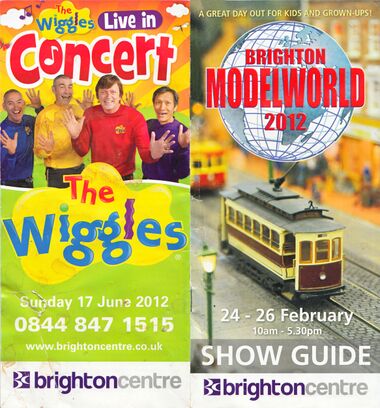 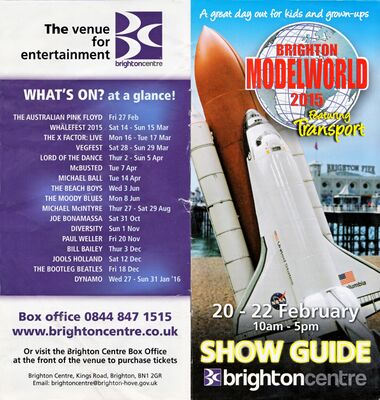 Brighton Modelworld was a much-loved yearly toy and model fair held at the Brighton Centre, every February. Regularly reporting audience figures of over 10,000, Modelwoprld was a key date for people in the toy and model community all over the UK.

The museum used to exhibit at ModelWorld on one side of the 5BEL Trust's display space, and assembled and maintained the life-size Pullman carriage backdrop behind the stand.

It was announced in May 2016 that the 2017 show wouldn't be taking place a the Brighton Centre, and that a suitable alternative venue had not been found ... with the result that there would not be a 2017 show, and that Modelworld was now "suspended" until such time as alternative arrangements might be made to resurrect it.

Once again the Brighton Centre is crammed with the huge range of exhibits from all over the UK that make this show so different from many others. There will be over 100 exhibitors and more than 30 traders showing everything from the tiniest model aircraft to a full size replica World War 2 Spitfire aircraft.

In addition to those exhibits, where you can only look and marvel at the skill and dedication of the builder, there will also be those where children, of all ages, can actually get their hands on the real thing and either drive a model train or boat, or even, thanks to our friends at Airfix, actually make and paint your own.

In order to recognise the tragic events of almost exactly 100 years ago, there will be a spectacular model of RMS Titanic on show, and at specific times each day, will actually sail on the indoor boating pool.

For the first time there wil also be a "Flying Hall" where, thanks to safety netting, visitors will be able to get up close to see these amazing models actually fly indoors.

As you will have seen on your way into the seafront entrance, there is a full size steam locomotive on view outside to celebrate the huge influence that the London, Brighton & South Coast Railway's Brighton Locomotive Works had on the City. But while the locomotive bears the wholly accurate name and livery of Loco Dept Brighton Works, all is not what it might seem, so why not try to identify the reality!

During the day there will be announcements giving details of some of the time specific features of the show and if, for example, you would like to see the Hot Racers version of "The Italian Job" or Titanic sailing from Southampton on its ill fated maiden voyage, just listen out.

Throughout the Brighton Centre you will find a huge variety of food and drink outlets, serving everything from a hot dog to a full meal and if you want to treat yourself to a relaxing meal, or just a coffee, while seeing the newly created stunning views of the coastline from Worthing to Seaford, a visit to the Skyline Resaurant is a must.

On behalf of each and every exhibitor and trader, the staff of the Brighton Centre and our own MOG team, we thank you for visiting Brighton Modelworld 2012 and will look forward to seeing you again next year.

ModelWorld 2016 took place from the 19th-21st February. The museum was showing a few items from the museum and stores, including a large radio-controlled helicopter build by Gordon Bowd, and a 5" gauge model of LNER 2743 (BR 60089) Felstead, a sister locomotive of 4472 Flying Scotsman.

The Museum showed the full-size "Doris" Brighton Belle backdrop that was on the stand last year (scale: 12 inches to the foot), and also some of the original Pullman interior marquetry and furniture.