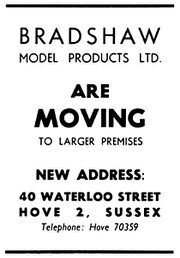 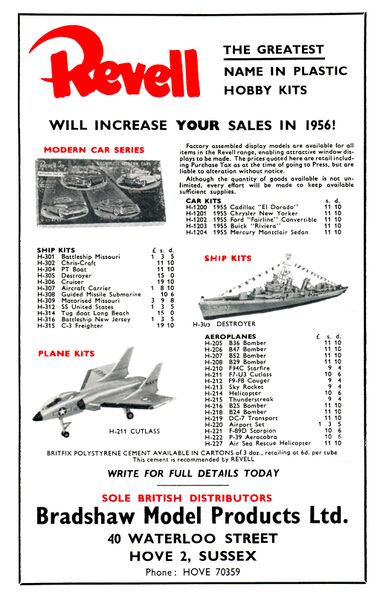 Bradshaw Model Products seems to have started out as a local agent for a motorcycle company, with premises on 6 Western Road, becoming S.G. Bradshaw's in the 1920's.

Around this time, it was fairly common for shops that sold bicycles to pad out their range by also selling toys and modelmaking equipment (these being other interests for lads with disposable income and technical inclinations – Halfords were also a Meccano stockist) and Bradshaws became a significant local seller of modelmaking supplies. They show up as an advertiser in Meccano Magazine from 1953 to 1956

Bradshaws don't seem to have been shy about opening and closing "satellite" premises, and had shops scattered all over Brighton and Hove at various times ... their "Bradshaw Model Products" adverts list the main address at being still at 5-6 Western Road until around ~1953, and a new address at 40 Waterloo Street (just around the corner, on the same block) starting with the cover of the 1954 catalogue.

Impressively, a 1956 trade advert lists Bradshaw as being the sole UK distributor for Revell plastic model kits. However, this might have been short-lived, as Revell's advertising in Meccano Magazine (from 1956 onwards), seems to indicate a proper UK subsidiary of Revell now acting as distributor, with a London address.

We've seen just one Bradshaw advert for Revell in Meccano Magazine: a quarter-page ad in the March 1956 issue, which also seems to have been Bradshaw's last advert in MM.