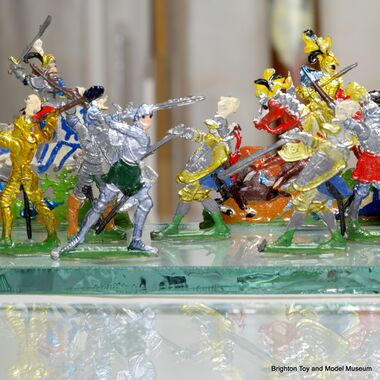 Part of the "Battle of Morat" display [image info] 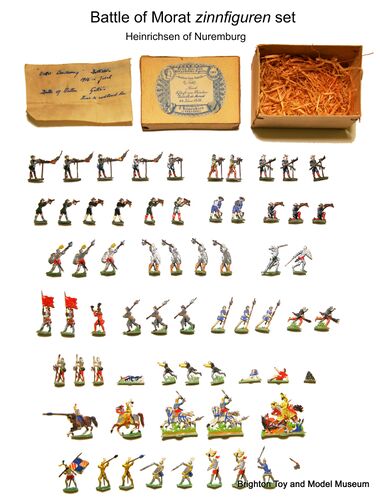 Heinrichsen "Battle of Morat" set. The set probably contained some trees and vegetation, but we're not sure which additional pieces might belong [image info]

A large set of painted German "Nuremberg scale" (~3cm) flat lead figures produced by E. Heinrichsen of Nuremburg to commemorate the Battle of Morat (also known as the Battle of Murten).

The figures are distributed across a well-lit glass shelf in Arch Four.

Identification was made somewhat easier by the fact that the figures were still in their original box, with a label giving the set title ("Bataille de Morat" / "22 June 1476") and maker details "E. Heinrichsen in Nürnburg". The label also displays the image of a medal awarded to the company in 1882, so the set presumably won't be any earlier than this.

The Battle of Morat

The battle's anniversary is celebrated every year in Morat, and the conflict was also made the subject of a massive ~ten-metre by hundred-metre panoramic painting by the panoramicist Louis Braun in 1893. The painting was unable to be displayed for most of the Twentieth Century due to its size, but was displayed in 2002 in a special cube-shaped building on Lake Morat, designed by architect Jean Nouvel, the Morat Monolith.