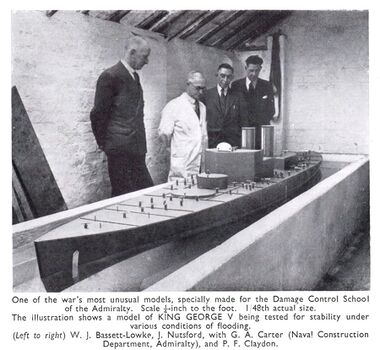 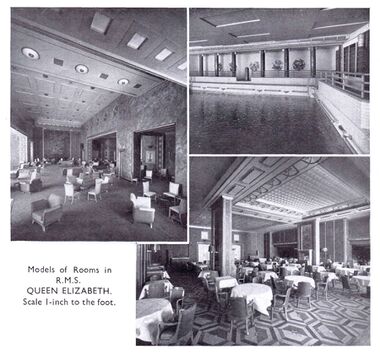 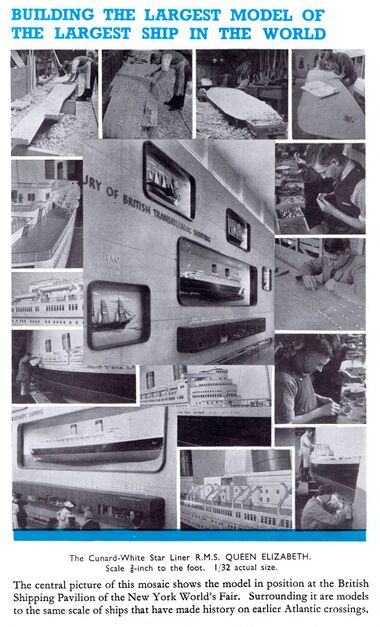 1:32-scale: "Building the Largest Model of the Largest Ship in the World", Bassett-Lowke [image info] 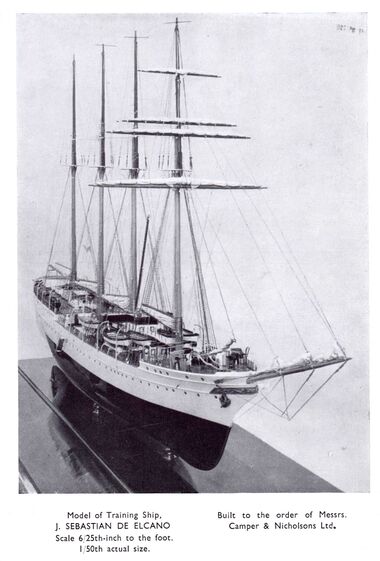 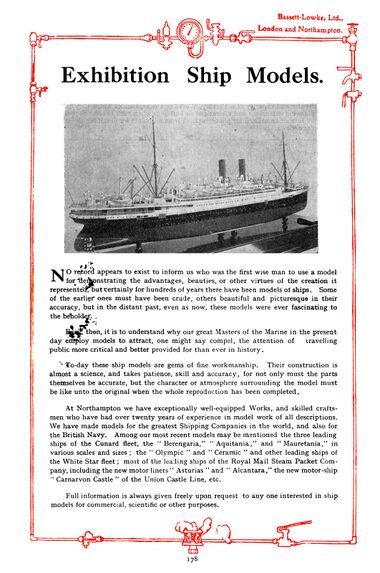 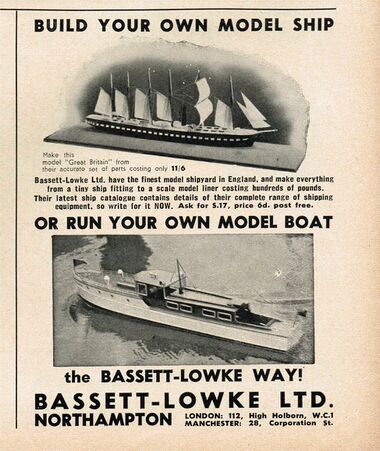 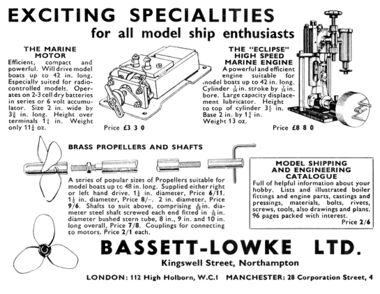 Bassett-Lowke Ltd.'s "Ships" range was a major part of the business and had its own catalogue (Section "S"). W.J. Bassett-Lowke had a keen interest in ships and boats,and wrote a book on the history of shipping and a children's book on waterways. He was then joined by the first manager of the London shop, who was a marine architect and who started producing designs for B-L.

The ship model side of the business got a boost after WW1 due to the amount of shipping that had been sunk, companies commissioning replacement ships would often also want a model. B-L also got a number of nice contracts to build opulent models of the new ocean liners being built by White Star and Cunard, and there was consequently a strong overlap between the ship catalogue and the exhibition model business.

W.J. himself used to carry around with him a model ship diorama of the "Golden Hinde", conveniently built into the case of a gold pocket-watch - if he ever found himself chatting to a potential ship model client, he could pull out his watch-fob and show it as a conversation-piece that emphasised the fine detail and precision that his company's craftsmen could produce.

Less extravagantly-funded customers could browse the catalogues and obtain plans and parts to build their own model ships rather more cheaply, since they'd be supplying the costly "craftsman" labour themselves.

B-L also went on to produce waterline models for the armed forces, for recognition training and for planning.

No record appears to exist to inform us who was the first wise man to use a model for demonstrating the advantages, beauties, or other virtues of the creation it represented, but certainly for hundreds of years there have been models of ships. Some of the earlier ones must have been crude, others beautiful and picturesque in their accuracy, but in the distant past, even as now, these models were ever fascinating to the beholder.

Easy, then, it is to understand why our great Masters of the Marine in the present day employ models to attract, one might say compel, the attention of a travelling public more critical and better provided for than ever in history.

To-day these ship models are gems of fine workmanship. Their construction is almost a science, and takes patience, skill and accuracy, for not only must the parts themselves be accurate, but the character or atmosphere surrounding the model must be like unto the original when the whole reproduction has been completed.

At Northampton we have exceptionally well-equipped Works, and skilled craftsmen who have had over twenty years of experience in model work of all descriptions. We have made models for the greatest Shipping Companies in the world, and also for the British Navy. Among our most recent models may be mentioned the three leading ships of the Cunard fleet, the "Berengaria," "Aquitania," and "Mauretania," in various scales and sizes; the "Olympic" and "Ceramic" and other leading ships of the White Star fleet; most of the leading ships of the Royal Mail Steam Packet Company, including the new motor liners "Asturias" and "Alcantara," the new motor-ship "Carnarvon Castle" of the Union Castle Line, etc.

Full information is always given freely upon request to any one interested in ship models for commercial, scientific or other purposes.

You cannot put a LIner in a shop window nor a Harbour in Cockspur Street, but you can exhibit a realistic model and enable the world to appreciate yuor facilities for transport, and the comforts you offer to travellers. A good scale model tells this story efficiently, it will never lie nor offend, and works without a weekly paysheet. We specialise in models of Ships, Harbours or Docks, built with absolute fidelity and realism; we also manufacture Model Ships' Fittings, Sailing and Power Boats of all types.

All our Models reproduce the character, the individuality, the atmosphere and even the romance of the original. They are not dead but living images. Their appeal to the eye and to the mind is irresistable. No one can pass them by. They appeal to chuildren of all ages, makign the grown man a child and the child a grown man.

The modern ship has gone far beyond the power of words to describe it. It is not much use telling people how many express trains could run abreast through her funnels, or how she would look if placed in Trafalgar Square. Not every one hears and many who hear forget. Photographs and pictures are better, but they still fall far behind the combined realism and romance of the famous Bassett-Lowke Models. We have made these models for most of the greatest shipping companies in the world and also, which is perhaps even more important, for the British Admiralty.

Let a qualified representative call upon you and discuss the possibilities of publicity by means of scale models.

Please send for a copy of our latest publication – SCALE MODEL SHIPS.