A sizeable red and black clockwork cargo vessel (with key) made by (Bassett-Lowke), with two masts and a single black funnel showing the letter "S" in white.

The model was a prewar design, and was sold by Bassett-Lowke in around 1946/47 as a special order to the Smailes shipping company, who ordered it finished and painted in their colours (hence the "S" on the funnel). 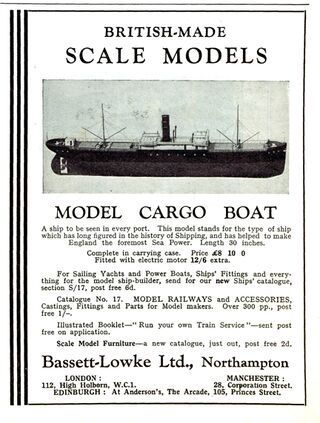 A Bassett-Lowke advertisement in Meccano Magazine from around 1931 (right) shows a "Model Cargo Boat" that seems to be essentially the same as the Museum model, apart from the mast details and some superstructure. It appears to have the same hull, the same single funnel with two ventilation ports and essentially the same layout, and it is probable that the Museum's model was built by B-L as a customised version of the boat in the advert.

A firm of Thomas Smailes and Son was established in 1890 to manage the shipping interests of Thomas Smailes and his son Captain Richard Smailes, and there are also online traces of a company referred to as the "Smailes Steam Ship Company", which might be the same business, or a successor.