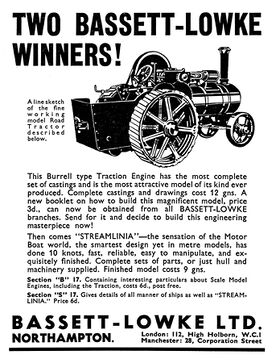 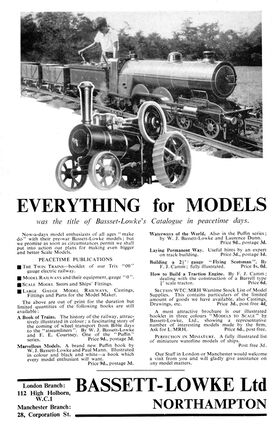 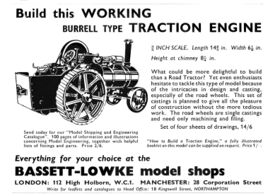 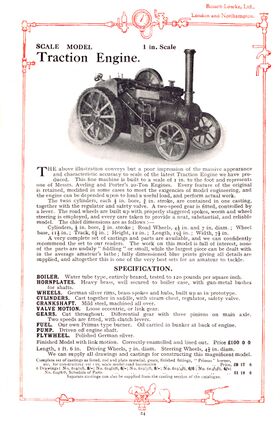 1929: Bassett-Lowke's previous model, a one-inch-scale (1:12) Aveing-Porter traction engine model. This earlier model, described by B-L as "imposing" was simply too big, heavy and unwieldy for most customers, and the 3/4", 1:16 model that replaced it was much more successful. [image info]

This model is an exceptionally well-built and finished example, with additional physical detailing and parts that weren't part of the standard Bassett-Lowke design, and absolutely impeccable painting and lining, and we believe it to have been built as a display or exhibition model. The model went on display at the start of January 2016, as part of the museum's 25th anniversary improvements.

The additional detailing that wasn't standard on the Bassett-Lowke sets include a toolbox, front and rear numberplates (GK1962), a ladder, a hose-rack, duckboarding, a side walkway, and a concealed burner. Normally in these models the design of the driver's area is slightly compromised to allow the engine to be lit easily, and the coal storage area is converted to a liquid fuel tank. In this model, the whole upper area has been finished to look exactly like a real traction engine, and the burner and fuel tank is concealed underneath the floor area. 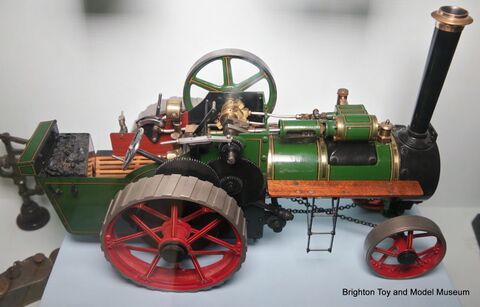 Angled view of the traction engine model, showing some of the customised enhanced detailing not present in the standard Bassett-Lowke build 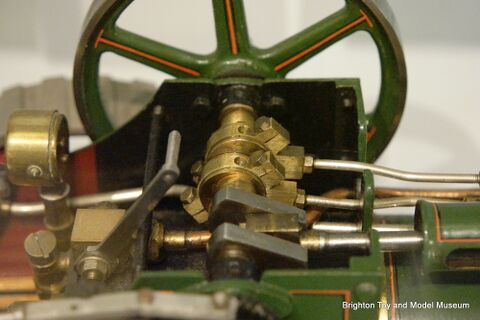 The Burrell traction engine kits of parts was one of the most important long-running product lines for Bassett-Lowke after World War Two, and featured heavily in adverts and on catalogue covers.

Unlike the B-L railway locomotives, a steam enthusiast with ambitions to one day own a real Bassett-Lowke model of their own could buy a traction engine and have a fully-working stand-alone model that didn't require track or any other expensive accessories ... and if they had some technical engineering expertise, they could save more money and just buy the critical castings, plans, and builder's instruction manual.

This money-saving option helped B-L continue to make sales on a single product through a period when part of their traditional client-base - very wealthy enthusiasts – was drying up. The Burrell traction engine also had the advantage over railway locomotives that a single model of traction engine tended to please all most everyone, whereas with railway locomotive enthusiasts there was such a ridiculously wide range of possible locomotives and configurations that selling into that market required a spread of models, with the attendant loss of economies of scale and problems with stock.

" What could be more delightful to build than a Road Tractor? Yet even enthusiasts hesitate to tackle this type of model because of the intricacies in design and casting, especially of the road wheels. This set of castings is planned to give all the pleasure of construction without the more tedious work. The road wheels are single castings and need only machining and filing.

"How to Build a Traction Engine," a fuly illustrated booklet on this model can be supplied on request. Price 1/-. " 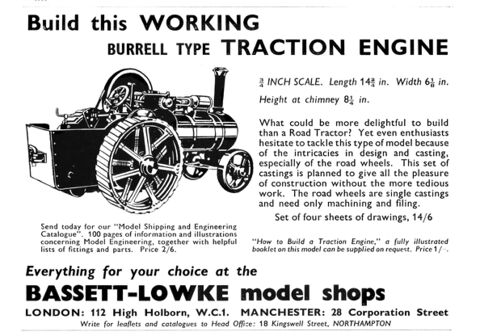