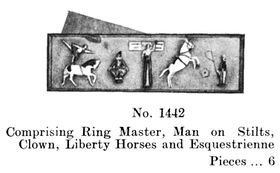 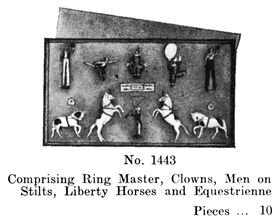 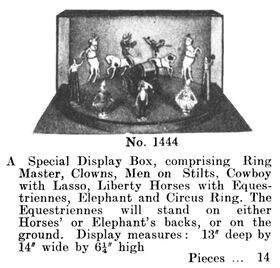 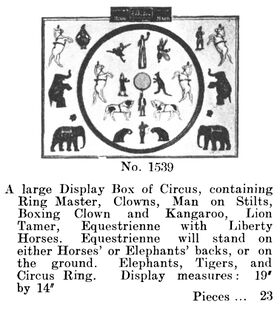 Britain's Mammoth Circus (more commonly referred to nowadays as just "Britains Circus") was a range of painted lead figures made by Britains Limited between the wars.

The range was sold as pieces that could either be bought individually, or in sets.

Retailer's colour point-of-sale "showcard" for Britain's Mammoth Circus, small b/w image from the 1958 Britains catalogue. There are no obvious changes to the showcard since the 1940 version

The name may possibly have been inspired by Edwin Hughes' "Hughes' Mammoth Equestrian Establishment", a British travelling circus founded in 1843 by the manager of Batty's Circus in London.

"Britains Mammoth Circus" wasn't nearly as large a range as their other animal-based ranges, but since the "official" circus range of animals was limited to animals with specifically circus-centric poses or decorations, the range could easily be padded out by adding "standard" exotic animals from the Britains Zoo range, horses from the Britains Farm range, cowboys for a "Wild West" circus act, and so on. The man pushing a wheelbarrow from the Britains Garden range might double as a circus elephant minder, or the single crouching "performing" zoo tiger might be posed on an upturned tub in the circus ring, with other more naturalistically-posed "zoo" tigers prowling in the background.

Since other manufacturers also produced circus models to the same scale as Britains, there was no shortage of alternative and additional third-party circus clowns and performers that could be added to the set.

A large Display Box of Circus, containing Ring Master, Clowns, Man on Stilts, Boxing Clown and Kangaroo, Lion Tamer, Equestrienne with Liberty Horses. Equestrienne will stand on either Horse's or Elephants' backs, or on the ground. Elephants, Tigers, and Circus Ring. Display measures: 19" by 14".
Pieces ... 23