A scratchbuilt model of a red petrol Brighton Hove and District AEC/Tilling ST-type double-decker bus, No.1, for Portslade and Kemp Town (1932-44).

The bus has a white band across the upper windows upwards, a silver roof, and a thin white stripe below the lower windows, numberplate GW6289.

Although the upper deck us roofed, the curved set of stairs that lead to it are open. 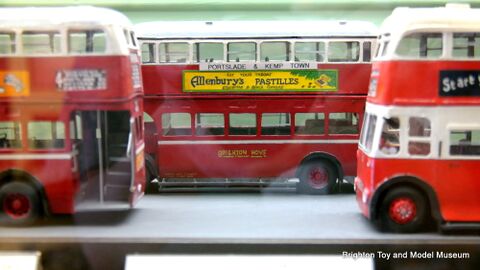 Period advertising is for Allenbury's Pastilles on the side, Simonds on the back stairwell side, and Armond fruit on the front.