A scratchbuilt model of a Brighton Hove and District AEC/Tilling petrol STL Type No.4 double-decker bus, for Southwick, numberplate NJ4661. 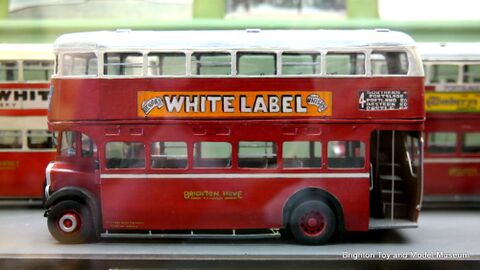 Period advertising is for Dewar's White Label whisky on the side, and ??? Luxury Flats, and Champion spark plugs and OXO on the front and back.

The STL or Short Type Lengthened bus format appeared in 1932, with the length for buses being increased from 25 to 25 feet.

The emergence of specified standardised "types" within the General Omnibus and then London Transport fleets emerged partly as a result of servicing requirements - since the chassis and bodywork were serviced separately, and the two types of servicing took different amounts of time, labelling buses with their type removed uncertainty over which chassis could be bolted back under which sets of bodywork.

In 1932 Tilling had previously received eighty AEC Regent STL chassis (and added their own bodywork) to operate on behalf of the London General Omnibus Company.