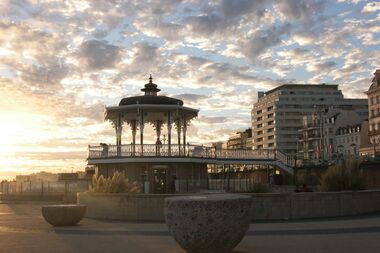 The Brighton Bandstand, known as The Birdcage (and officially the Western Bandstand), is near the site of the West Pier and Peace Statue, on Brighton seafront near to the Brighton-Hove border. It was designed by Philip Lockwood as part of the seafront upgrades in 1884. Lockwood had also designed the Brighton Promenade and Madeira Lift on the Eastern Esplanade.

The bandstand was the subject of a £950,000 renovation that culminated in its relaunch in 2009. The renovation work included removing, stripping and repainting the pillars and ornamental ironwork, replacement copperwork, the recreation of the original bridge from the bandstand to the roadside pavement, and the conversion of the ground floor into a site suitable for a café.

The original purpose of the bandstand was slightly disingenuous ... as well as providing a decorative space for musical performances, the supporting ground-floor part of the structure was designed to house a set of public toilets, making the Bandstand a more functional and practical building than it appears at first glance. Although the ornate upper space is not usually now used for public musical performances, it looks especially beautiful at sunset, and is hired out as a location for weddings.

After the building's 2009 renovation, the lower floor space is now The Birdcage Bandstand Café Bistro.

The bandstand is on the seafront by the end of Bedford Square.