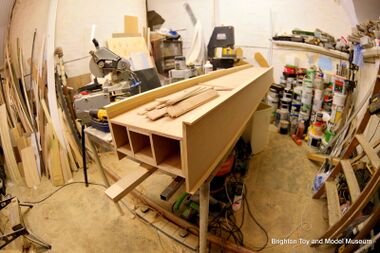 A large grey model of a section of box-section bridge, overhead above an archway in Arch Three.

The bridge was built in December-January 2016/2017 as an overhead display stand, and was installed in January/February 2017. Its primary purpose is to act as a wall-mounted display stand for a a five-inch gauge steam-powered model garden locomotive that is expected to arrive in the museum in Summer 2017. The bridge acts as a visual extension of the five-inch gauge Brunel bridge at the other side of Arch Three.

The bridge is built from plywood box section with reinforcing steelwork, painted grey and topped by a railing. Its held to the wall by heavy-duty steel inverted "F"-brackets.