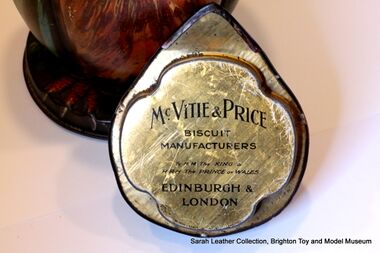 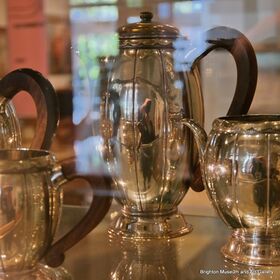 A matching pair of large lithographed tinplate "Bluebird" biscuit tins produced for Scottish biscuit manufacturer McVitie and Price. The V&A list the bird as having been made by the firm of Barringer, Wallis & Manners in 1911.

The tin's body is shaped roughly like an upright rugby ball, with a circular base with embossed feet, and a somewhat squat removable head. The overall colour is greeny-blue, with a yellow/orange chest and a reddish-orange beak.

In the case of the bluebirds, the central fourfold-symmetrical "vase" design without the bird's head looks like a four-petalled or four husked seedpod or flowerbud, and looks to be less like a bird and more like a plant-inspired abstract vase.

It in fact looks rather as if it might have been inspired by some of the silverware produced in Paris by Paul Follot (1877-1941), a French designer involved with the "L'Art dans Tout" movement, a traditionalist anti-modernist counterpart to the various "rustic" movements in England. Follot's later work included designing for Wedgwood.