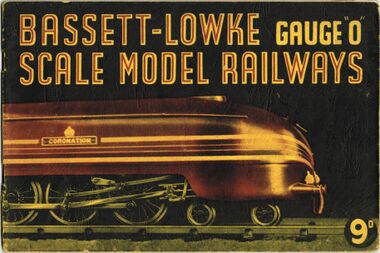 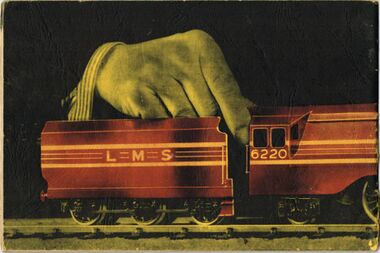 A rare original Bassett-Lowke catalogue for the company's gauge 0 trains and locomotives, dated 1939.

The catalogue features a wraparound photograph of the company's model Coronation 6220 locomotive, with a hand holding the rear of the train (only visible on the back cover).

It's the same photograph that was on the ~1937 catalogue, but here colorised to red and yellow to commemorate the "new" 1939 red and gold Coronation Scot train, and the company's corresponding red-and gold model

The catalogue doesn't display have any obvious date information, but the red Coronation Scot train appeared in 1939, and the catalogue with its revised red cover is referred to in an advert in a 1939 issue of Meccano Magazine, as "our new catalogue"