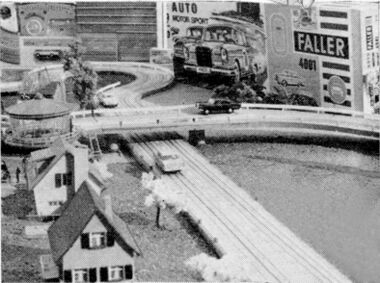 Faller's 1:84 scale Auto Motor Sport was one of the smallest-scale slotcar systems of the 1960s.

The Faller slotcar system was apparently a licensed version of the same system used by Aurora over in the US.

Faller's system allowed two cars to run independently on the same two-conductor slot. This was achieved by fitting each car with a rectifier so that one car would run if the voltage between the two conductors was positive, and the other if it was negative. The master controller would then switch rapidly between the two voltages, and each car would extract out its own part of the resulting AC signal, presumably also with a smoothing capacitor to that each car's motor was fed with a reasonably smooth voltage.

The problem with multiplexing two signals down the same pair of wires, using positive and negative parts of the cycle, was that unless one had a special trick for jolting a car's mechanism into reverse, you lost the ability to make cars run backwards by reversing the polarity. This wasn;t usually a problem for slotcar racetracks.

Like Tri-ang, Faller had a range of appropriately-scaled buildings already intended to work with model railway layouts which ould be pressed into service with road systems, and like Minic Motorways, Auto Motor Sport was suggested for use to make town and city layouts, and to not just be restricted to competitive racing.

However, where Minic Motorways was nominally scaled to 1:76 (to suit 00-gauge British model railways, at 4mm/foot), Faller's range was quoted as being a smaller "1:84" scale closer to the 1:87 scale used by H0 scale railways used on the Continent and in the US (3.5mm/foot).

Faller's choice of vehicles seems to have been somewhat smaller than the Minic range, but their choice of "fast" cars wasn't so different from that of other manufacturers.

What was probably more telling w.r.t. UK sales was the fact that so many of the Faller buildings were based on styles specific to Continental Europe. To someone wanting to create urban roadways with buildings that looked like what they saw in their own neighbourhood, many of the Faller items wouldn't be suitable, and if they wanted to add a model railway feature, it'd also be more difficult to get UK-style locomotives and rolling stock in H0 than in 00.

This meant that in the UK, Faller was seen mostly as a brand associated with continental style scenery and "European" model railway layouts, which limited the brand's UK distribution, and also meant that there were fewer toyshops trying to actively promote the Auto Motor Sport brand than, say, Triang's Scalextric, and also less advertising and general promotion.

The "natural home" for Auto Motor Sport was therefore mainland Europe and the USA, where the prevalence of H0 meant that it was instead Tri-ang's competing Minic Motorways that was at a disadvantage with respect to standards, promotion and availability.

"Down the back straight – round the new 'swing out' hairpin – into the reverse bend" – all the features, excitement and thrills of the large scale tracks yet fits the tabletop with room to spare!

Faller Auto Motor Sport is the most advanced of the smaller scales. Not just a miniature roadway but a carefully designed system to give you slot racing at its best. Auto Motor Sport also gives you the meticulous attention to detail both in cars and accessories for which Faller are so famous.

It's fun to race with Faller.

Look out for these new models: Jaguar E-Type Coupé, Cadillac, Mercedes 300 SE and Mercedes SL., incorporating the new Faller electric motor which enables the saloons to have unobstructed 'see-through' and allows for perfect scale reproductions of open types.

With Faller Auto Motor Sport you can have the thrill of big-time racing on your own dining room table and, what is more, you can build models of Silverstone, Brands Hatch, or Goodwood racing circuits. The Faller system is such that two cars can be independently controlled on the same track and this gives realistic racing. The basic set 4001 contains two cars, a Mercedes 190 SL and a Porsche, two controllers, 12 pieces of track and a flyover. The cost is £5 5s. 0d. By the way, Faller also make a large selection of model buildings.

FALLER AUTO MOTOR SPORT has been a complete success:

A modern hobby for the whole family. It finds its complement in the world-renowned FALLER line of models and accessories for HO model railroads. N Gauge (9 mm) is also catered for. A combination of road and rail in miniature models was long the wish of the model fan. Here we offer you a combined line, unequalled in its completeness.

Kits of all types, including autos and auto motors are available. We have always aimed at stimulating the creative impulse, and we have remained true to this principle. We are therefore delighted to hear ever and again how many people all over the world have found joy in their hobby with our models.

Miniature auto races or traffic operation, freeways or narrow roads – all these you can build now with AUTO MOTOR SPORT, the new FALLER toy models. Small autos with electric motors can be controlled from a central point and run at any desired speed. A guide pin on the auto, running in a groove in the pavement, keeps the car in its lane.

Really a joy for young and old to see the tiny AMS cars gaily make their rounds. And there are all sorts of variations, scenic accessories, technical niceties, etc. AUTO MOTOR SPORT is a hobby complete in itself. But it is even more fun when combined with an HO model railroad, with grade crossings, crossing gates and lots of different models.

- it's really a hobby for the whole family!