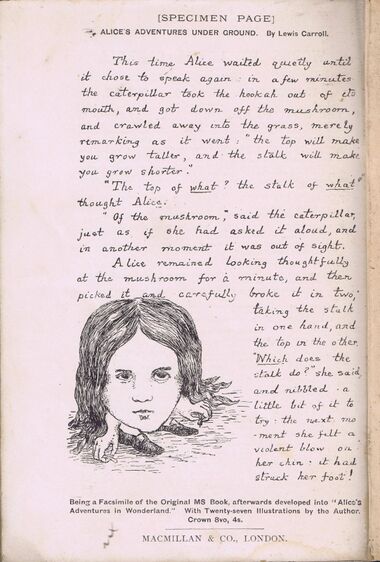 A replica page from "Alice's Adventures Under Ground", Carroll's original manuscript (being advertised as a special edition in 1894). [image info]

The sequel, Alice Through the Looking-Glass was published in 1871.

The book started out as a children's story called "Alice's Adventures Under Ground", which Carroll had created for the children of the Liddell family (notably Alice Liddel), and existed as a neat handwritten manuscript illustrated by Carroll, until the story's enthusiastic reception persuaded Carroll to rewrite it and get it properly published, with the services of a professional illustrator.

John Tenniel (1820-1914) was a London-born artist whose main body of work was a mass of over two and a half thousand political a cartoons and drawings produced for Punch magazine (1841-), but who had also done other work, such as producing a fresco for the House of Lords. Tenniel had had an art training, but his dissatisfaction with what he felt was the incompleteness of teaching methods (which seemed fixated on teaching students to replicate classical works) ended up with him essentially teaching himself to draw in his free time, with the places that he visited for source material including London Zoo.

The zoo visits and studies of non-human anatomy paid off, and a significant part of Tenniel's incisively brutal political cartooning style involved animals or people with grotesque caricatured proportions, but whose physiology nevertheless had a starkly realistic quality to it.

It was this caricature work that lead Carroll to choose Tenniel as an illustrator, resulting in a unique work in which Carroll's alien and surreal writing, which might otherwise have left the reader with a slightly nebulous understanding of the visual appearance of the Carroll universe, was given a solid reality by Tenniel's acutely specific linework.

For many first-time readers exposed to the Tenniel illustrations on their first reading, the Tenniel pictures defined Carroll's universes, and became inextricably linked to the text, to the point that they became seen as the official record of events that Carroll's text then described. Although many later illustrators have since tried to take on the challenge of "illustrating Alice", the influence of Tenniel's uncompromisingly stark vision is difficult to escape, and the "other illustrators"' work has often ended up being regarded as softened derivative versions of Tenniel's characterisations.

Tenniel want on to illustrate Carroll's sequel, Alice Through the Looking-Glass, but then seemed to turn away from book illustration, perhaps realising that he'd never be able to improve on the impact that he'd had on the medium with the Alice books.

Pages in category ‘Alice in Wonderland’

Media in category ‘Alice in Wonderland’