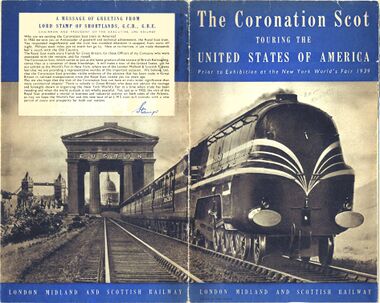 The Coronation Scot's 1939 US Tour, LMS publicity brochure (blue), printed in the UK and sent over to the States with the train [image info] 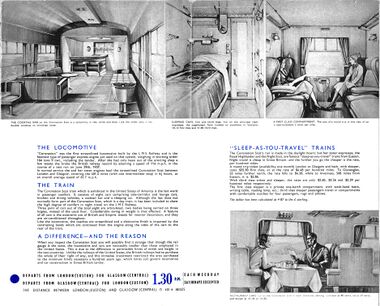 An artist's impressions of the interiors of the brand new super-luxury coaches built for the red Coronation Scot train, from the 1939 "American Tour" brochure [image info] 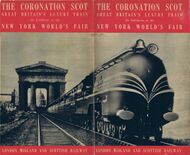 A blue LMS publicity brochure for the Coronation Scot's 1939 US tour, marked "Printed in Great Britain".

The Coronation Scot's tour was a followup to the LMS Railway's previous successful publicity tour in 1933, in which one of the Royal Scot-class locos was mocked up as locomotive number 6100 Royal Scot and sent around North America on tour, with a schedule coinciding with the Chicago 1933 "Century of Progress" exposition.

For the 1939 tour the LMS were now showcasing the red-and-gold "second-generation" version of the Coronation Scot train, whose redesigned carriages were meant to rival anything that the US Pullman company had to offer.

Title reads: "Coronation Scot / Touring the / United States of America / Prior to Exhibition at the New York World's Fair 1939"

The brochure is a single fold-out sheet that opens out into sixteen panels, eight on each side of the sheet.

The "back" of the sheet (the side that doesn't include the outside cover-art) can be used as a single landscape-format poster, with a picture of the train, map of Britain and some text distributed over the centre four blocks, and with an additional column of flanking photographs of scenes from Britain on each side, spread over the last two columns of two blocks per side side.

The other side of the sheet is more complicated, with different sections having different orientations. There is a two panel section for the front and back cover, facing another two-panel section showing sketches and descriptions of the coach interiors, and four panels with the opposite orientation are arranged into a pair of two-panel pages, with photos and a blue coat of arms, and "To Scotland by the / Coronation Scot" along the bottom in large blue text.

The "blue" and "red" tour brochures

The LMS railway company produced two different sets of publicity leaflets when they sent the train to the United States in 1939:

It's interesting to compare both versions to see how the publicity material evolved: the later red brochure contained photographs of the coach interiors, in this version, the photography presumably hadn't yet been done or wasn't ready, and instead there are drawings of the interiors (within a different layout).

There's another notable difference when you put both brochures side-by-side: Both covers appear to show the same composite b&w photograph of Coronation 6220 appearing to leave Euston Arch in London, with St Paul's Cathedral and Tower Bridge conveniently relocated into the background: However, the earlier "blue brochure" photo shows the "real" Coronation 6220, which didn't have a headlight or bell. In the later red brochure, the image has been doctored again, and someone has carefully painted in the missing headlight and bell to make the loco look more like the "fake" red Coronation that actually went to the US.

Since the LMS used black-and-white publicity photographs, there was a certain amount of understandable confusion outside the LMS as to colouring - it's a fair guess that the first brochure might have been blue to match the colour of the "real" Coronation 6220 locomotive, and that the brochure designers perhaps didn't realise at this time that that the loco being sent to the US was actually red ... but that when the later version of the brochure was designed, they took the opportunity to swap the interior drawing for photographs, doctor the front of the train image ... and switch to a more appropriate red colour for the panels.

Back-cover text - the spectre of war

The rear cover carries a slightly poignant message from the Chairman of the LMS to the American public, expressing his wishes for a period of "peace and prosperity", even though "the world outlook is not wholly peaceful". Note the use of American spelling and terminology ("railroad" instead of "railway").

Why are we sending the Coronation Scot train to America?

In 1933 we sent you an Ambassador of goodwill and technical achievement, the Royal Scot train. You responded magnificently and the train was crowded wherever it stopped, from morn til night. Millions went miles just to watch her go by. New as tomorrow, it yet made thousands feel a touch with the Old Country.

The Royal Scot made many friends for Great Britain, for those Officers of my Company who were associated with the venture, and for myself.

The Coronation Scot, which comes to you as the latest product of the science of British Railroading, comes then as a cementer of these friendships, It will make a tour of the united States, and be our exhibit at the World's Fair in New York, where we of the London Midland & Sottish Railway feel that we are providing a representative worthy of the occasion. We believe, too, that the Coronation Scot provides visible evidence of the advance that has been made in Great Britain in railroad transportation since the Royal Scot visited you six years ago.

May we also hope that the visit of the Coronation Scot can have an even wider significance than mere commercial objects? There is nobody in Great Britain who does not admire the courage and foresight shown in organising the New York World's Fair at a time when trade has been receding and when the world outlook is not wholly peaceful. Yet, just as in 1933, the visit of the Royal Scot preceded a revival in business and industrial activity on both sides of the Atlantic, so may we hope the World's Fair and this new tour of an LMS train will coincide with a new period of peace and prosperity for both our nations.

Since the Second World War broke out before the end of the year (leaving the train stranded in the US), these sentiments may seem a little over-optimistic. However, with the potential for a major war on the horizon, it may have seemed even more important to reach out to the US public and express a common hope that the conflict would not happen, and to try to make the US populace feel more connected to and related to the British people, in case the worst happened and their support was needed. If war happened, it was important that the US public felt a bond with Britain, and that US politicians knew this when they were making wartime decisions.