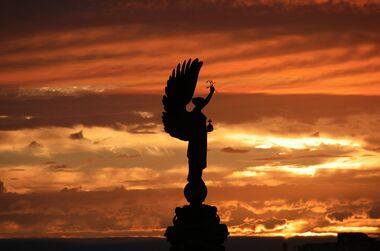 The Angel at sunset [image info] 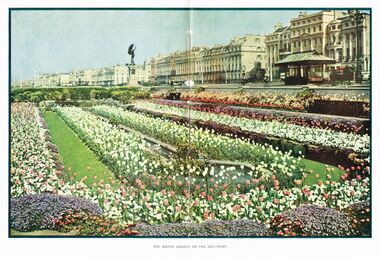 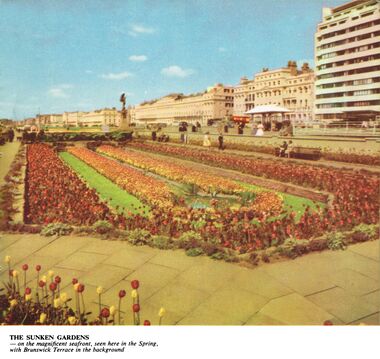 The Peace Statue, officially the King Edward Memorial, and known locally as just The Angel stands on the Brighton-Hove boundary, and was commissioned to commemorate the reign of Edward VII (1841-1910), who had just died. The statue was designed in the shape of an angel as a reference to Edward's nickname, "The Peacemaker". Before its unveiling in 1912, a temporary wooden version stood on the site for perhaps a year.

The statue carries the coats of arms of both Brighton and Hove, but maintenance was originally Hove's responsibility.

The "Angel" was sculpted by Newbury Abbott Trent (1885 –1953), a sculptor trained at the Royal College of Art and Royal Academy, who specialised in war memorials, and who produced a small number of quite similar-looking "Angel" memorials.

According to local legend, the statue was originally intended to be positioned so that the angel would be facing the sea, and would be the face of Brighton seen by passing vessels.

However, the angel's final position had it facing away from the sea and towards the town, perhaps because the townspeople wanted to see the statue’s face themselves. Instead of the Angel facing outwards and greeting outside countries with a twig of peace, it instead appears to have turned its back on the outside world, and is showing them its bottom ... which is probably not exactly in keeping with the original concept for the statue.

stands on the boundary between the two boroughs. It was unveiled by the late Duke of Norfolk in 1913 and consists of a winged figure of Peace in bronze, on a Portland stone pedestal. It is 24 feet in height, and was designed by Mr. Newbery Trent of Chelsea. Part of the memorial fund raised jointly by the two boroughs was devoted to the provision of a Home for the Queen's Nurses, in Wellington Road, Brighton.