A miniature Oil Can, around six inches long, made by Dunhill Motorities, probably in the first decade of the Twentieth Century. Dunhill Motorities was created by Alfred Dunhill (1872-1959), better-known for his later tobacco and luxury mens' accessories businesses. 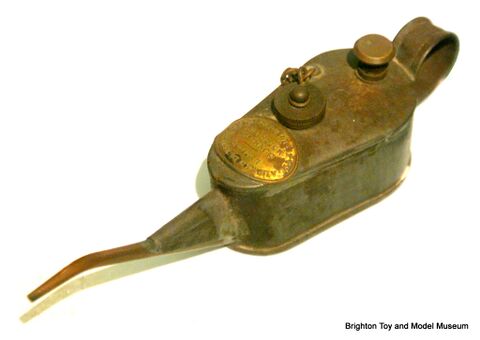 On taking over his father's saddlery business at the comparatively young age of 21 in 1893, Alfred Dunhill saw the coming age of the motor car and became determined to try to corner the market in all the myriad accessories that an owner of an example of the new form of transport might require (or long for). Having seen the range of accessories that one could sell to horse owners, why wouldn't an enthusiastic automobile owner want to avail themselves of a range of must-have accessories to make their investment as enjoyable as possible?

Dunhill used his ingenuity and experience of saddlery manufacture to create every type of motoring accessory he could think of, from googles to car clocks and weatherproof clothing, and "Dunhill Motorities" gained the slogan "Everything but the Motor".

One of Dunhill's successes was the 1904 invention of the Windshield Pipe, a tobacco pipe with a front-facing windbreak suitable for drivers of high open-topped cars, designed to prevent the tragedy of a driver attempting to truly enjoy a ride in the country, only to find that one's pipe had been extinguished by the breeze (or, getting a faceful of hot ashes).

Having realised that there was a comparatively untapped market for expensive luxury accessories for men, and that if one created a sufficiently desirable range of high-visibility products, owners would flaunt them at their friends and spread the word, Dunhill built on the success of the Windshield Pipe by opening what he considered to be the ultimate pipe and tobacco shop in London in 1906, with tobacco blends created for individual customers, and arguably the world's best pipe craftsman lured away from France to work at the company's own pipe workshop.

A natural progression was the Dunhill lighter (a personal item that would be seen by the owner's associates), which appeared in a number of James Bond films, along with Rolex watches and connoisseur champagnes, as a desirable "brandname" item.