A black laquered miniature sewing machine with gold decoration made by Casige.

The machine has a rectangular metal base with sloping sides and a half-moon cutout centred on the base's long side. 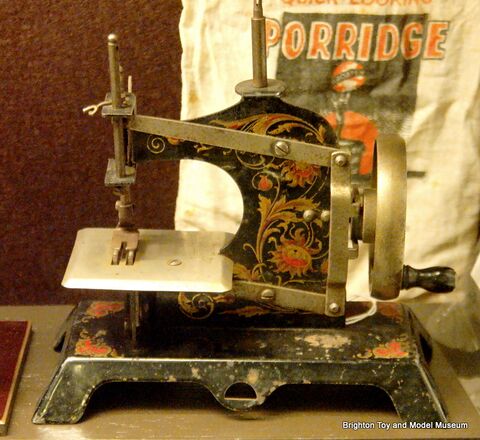 The silver-coloured workbed has the Casige logo of an eagle clutching a key in its claws, and the words, "MADE IN GERMANY", which dates it to before the end of WW2 (or at least, to before newer stocks of parts marked "MADE IN WEST GERMANY" would have started to be used, after Germany's partition).

The identification as pre-war is not a huge surprise, as the decoration is basically C19th, and the design is C19th/1900s/1910s, but some of the older designs did have a habit of lingering longer then expected. The mechanics of a good sewing machine design didn't "date" (copies of the Singer Model 20 were still being produced in the second half of the C20th), and many machines weren't updated cosmetically (with new bodyshells and frames) until the fashion for modernity finally caught up with the sewing machine market in the 1950s.