LLedo was founded by Jack Odell, arguably one of the three original founders of Matchbox Toys. The company name was Odell's surname spelled backwards. The brand is now a sub-brand of Corgi.

After Matchbox got into financial trouble, Odell came out or retirement, bought some of the older mouldings, and started his own company, LLedo, selling a range of nostalgic-looking pre-war styled toy vehicles reminiscent of the Matchbox "Models of Yesteryear" Series, but called "Days Gone".

Since these were mostly commercial vans, Lledo's initial business model was to maximise flexibility and return on investment by producing only a very limited number of basic designs, but to then expand this into a huge range by using different liveries and logos.

Lledo became experts in producing limited-run promotional diecast vehicles – if a company wanted a batch of toy vehicles produced in their company's colours showing the company logo, Lledo could offer a range of basic vehicle types, and then finish them to the customer's specifications.

At this point Lledo probably seemed like a niche "promotional" diecast toy company, but they kept expanding the range year after year until it contained 75 models, just like Odell's previous "Matchbox 1-75" range.

While many classic diecast toys aimed at children became highly collectable, the Days Gone range, aimed at adult collectors, paradoxically didn't. With children's toy's most of the examples produced were played with, lost, damaged, or badly stored, and had their boxes discarded almost immediately, meaning that rare examples in pristine condition with new-looking boxes occasionally command exorbitant prices.

With the LLedo "Days Gone" range, almost none of them were properly played with, and almost all of them were hoarded by collectors in their original boxes. The vast number of variations on just a few basic models also means that trying to assemble a complete collection is fairly futile and rather repetitive. As a result, these toys can be found almost anywhere that old toys are sold, new and boxed, for a few pounds.

In around ~1996 Lledo launched another range of classically distinctive British cars, Vanguards but this time based on post-war models, and without the previous emphasis on models that could also be used for promotional tieins.

The LLedo brand and tooling were acquired in 1999 by Corgi, which was itself acquired by Hornby Hobbies in 2008. The "Days Gone" range is now part of the Corgi Classics range. 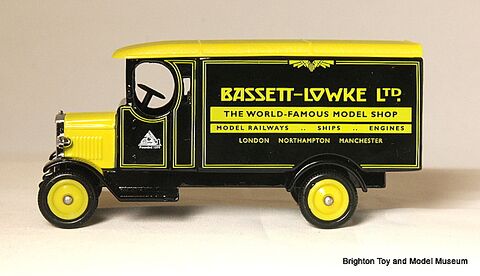 In the museum (shop)

Lledo's date-range lies outside our normal focus, and due to the circumstances in which it was made and sold, there still seem to be vast quantities of Lledo toy vehicles still out there, new and boxed. So although we don't have a Lledo section in the museum, we almost always have stocks of LLedo vehicles available for sale in the Collector's Market in Arch One, with prices starting at a few pounds.