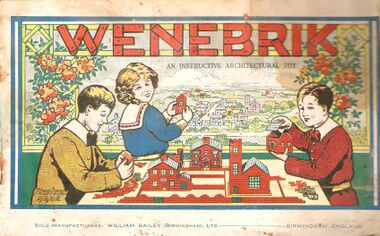 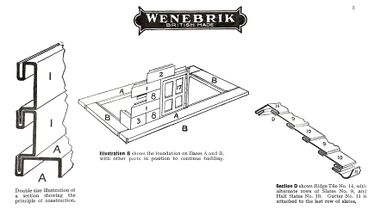 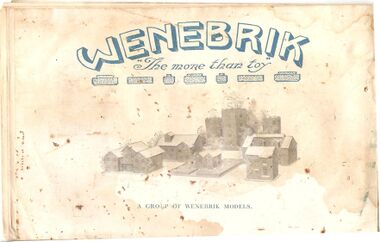 Wenebrik ("Pronounced 'Weeny Brick'", "An Instructive Architectural Toy") was a metal construction toy for creating model buildings, which appeared during World War One and was available until the outbreak of WW2.

It was manufactured by William Bailey of Birmingham (who also made the more frame-based Kliptiko metal contruction sets), and consisted of sets of folded painted metal tiles that represented bricks, which could be clipped together along with larger pieces such as windows and hinged doors to create buildings.

The five sets all included the same nineteen pieces, including corner pieces (at 90 degrees and 120 degrees), and roof tiles.

The marketing for Wenebrik was comparatively gender-neutral for the time, with the cover label art showing two boys and a girl playing with the set, however, when Wenebrik and Kliptiko were being sold together, the company differentiated between them by characterising the sets as "Kliptiko for Boys and Wenebrik for Girls".

The patent for Wenebrik's system was applied for on 9th January 1915 and granted on 13th May 1915 (patent No.382), with the applicant listed as William Bailey (manufacturer) of 213 & 215 Brearley Street, Birmingham.

The elements forming the walls of the house are stamped from sheet metal blanks, so as to give the appearance of bricks when the elements are assembled and the structure is viewed from the outside.

The roof of the house is formed from elements stamped in the form of tiles ... The two sides of the roof are connected together by V-shaped ridge tiles ...