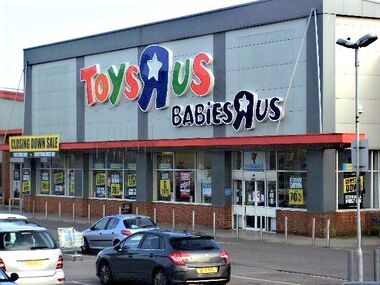 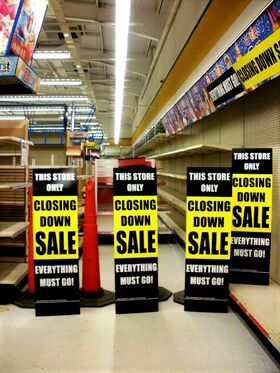 2018: The end of the line. Toys R Us Brighton Store during closing period [image info] 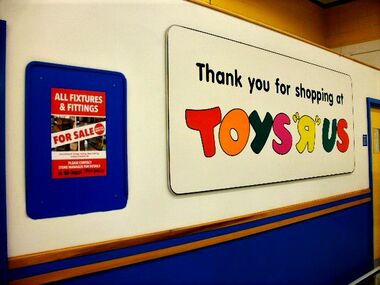 The Toys "R" Us business lasted for almost exactly seventy years (1948 - 2017/~2018), and became a major worldwide brand, with around fifteen hundred stores worldwide, split roughly 50:50 between the US and the rest of the world.

The company was started by Charles P. Lazarus (1923-2018). After leaving the armed services after the end of WW2, Lazarus noticed the number of ex-servicemen who were marrying and having children, and opened the Children's Bargain Town store in New Jersey, selling cots, cribs and other children's furniture. The store started selling children's soft toys as an obvious add-on purchase, and soon found that the toys seemed to be a better business than the furniture: A cot or crib would be bought once and possibly used again for a family's subsequent children: but a parent would be in the market for toys at least twice a year: for birthdays and Christmas. While a child only needed one cot, the number of toys they "needed" was only limited by a toyseller's ability to inspire and the pockets of the parents, and Lazarus opened his first Toys "R" Us store in 1957.

Lazarus' vision of how to be the best toy retailer was based on having attractive prices, a wide range of stock, and on making sure that you still had supplies of a popular toy when your competitors had run out. With these three rules, if the customer knew what they wanted your store would end up their default "one stop shop" for buying toys. If they usually visited other toy shops, then eventually they'd end up visiting yours when the other retailer ran out of a toy, and once they started frequenting your shop, if you always had what they wanted at a competitive price, there was no reason for them to go elsewhere.

Lazarus' stores were partly inspired by the new self-service supermarkets: instead of the store space being used for displays and the customer having to ask at a counter for an assistant to fetch a toy from a back-room store when they wanted to buy, the display space could also be the main inventory space.

Lazarus retired as CEO in 1994 and died in 2018 at the age of 94, unfortunately shortly after the news had broken that the company that he'd founded was being liquidated.

Toys "R" Us vs. the internet

Although the failure of TRU US was widely blamed on competition with the internet toy-sellers, this doesn't explain why Toys R Us weren't able to leverage their brand to become a successful internet seller themselves.

The company name "Toys 'R' Us" effectively meant "Toys are what we do", with the "are" written as a capital letter "R", in childlike scrawled letters in wildly different colours with the letter "R" shown in quotations and written back-to-front to suggest a childlike illiteracy.

The company's television advertising had a particularly memorable (and annoying!) jingle which managed to stretch out the company's short name by repeating it three times, in a rising-pitch crescendo: "We're called, Toys R Us, TOYS R US, T=O=Y=S R U=S!!!!! ". Although not exactly subtle, once heard, it was very difficult to forget the company's name or what they did.

The US company declared itself bankrupt in September 2017.

Opening its first UK store in 1985, by the time of its failure Toys R Us had a network of 105 stores around the UK, employing three thousand people. The failure of the US parent company in late 2017 threw a spotlight on the finances and problems of the UK business, and in particular an outstanding tax bill for fifteen million pounds that the company seemed to have no obvious way of paying.

The UK company went into administration on 28th February 2018. As part of the insolvency plan, 26 stores had already been earmarked for closure by Spring, with stock being cleared out for assumed further closures.

Toys ‘R’ Us has launched a CLOSING DOWN SALE with ‘Up to 70%’ off everything, a toy lovers dream but also an opportunity for new parents to pick up that all important car seat or pushchair for the littlest member of the family as Babies ‘R’ Us SALE is included in the Closing Down deals. There are also a range of Manager's Special discounts on selected products! Everything in store has been marked down and has to go, so please hurry to avoid disappointment. In-store only event.

On 2nd March it was announced that the company would be holding a liquidation sale and disposing of most of the UK stores. On 14th March a new announcement said that all UK stores were expected to close by the end of the following month. At around the same time, the US company made a similar announcement that all US stores were to close.

Discussions of the US store's problems have tended to focus on the fierce competition the company faced from the internet. While Toys R Us applied a "warehouse" model to toy-selling, with large "superstore"-type buildings and economies of scale leading to reduced costs that allowed it to undercut the prices of conventional toy retailers, internet retailers took this process one stage further, and in turn undercut the prices of Toy R Us. With neither the personal service and atmosphere of the smaller retailers, or the lowest prices of the online toysellers, Toys R Us ended up unable to explain to buyers why they should be giving the company their business.

Other commentators have suggested that the company may simply have lost their way, and failed to come up with the sorts of presentational and promotional initiatives associated with their earlier days.

In the UK, analysis was more brutal: toyshopping was supposed to be fun, and exciting, and inspirational. Toys R Us somehow managed to make a visit to a toyshop tedious and depressing, with the gloom of low-paid staff not helping to lift the atmosphere. The company's own website said that the earlier warehouse-style stores were the ones that were losing money, with things not so bad at the more recent, smaller stores that had a more intimate atmosphere and a more personal approach ... the ones that were more like traditional toyshops.

Somewhere along the line, Toys R Us managed to make toyshopping into a chore – something that you wouldn't want to do unless you really had to. Driving to a Toys R Us was something that you did in the run-up to Christmas to see if you'd forgotten anything, or something you did if you were doing last-minute shopping, looking for a specific toy, or trying to track down stock of a popular toy that was selling out ... but it probably wasn't somewhere that you'd go for inspiration when deciding what toy to get ... or somewhere that you'd drop into out of curiosity, to idle away a quarter of an hour and perhaps end up coming away with an unplanned purchase.

Media in category ‘Toys R Us’