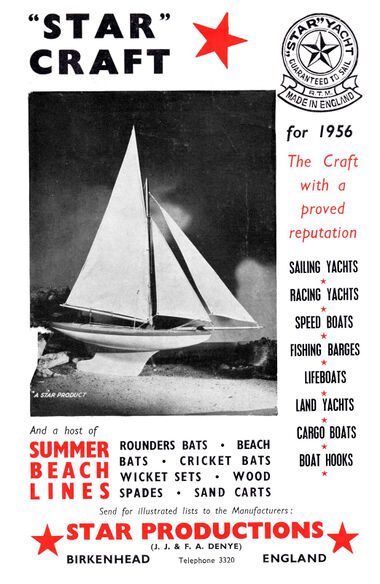 Star Productions of Birkenhead were known for their famous "Star Yachts" ("Guaranteed to Sail"), but also produced other types of model boat, and (like many other small toy companies) produced "summer lines" of beach toys and spades to sell in the summer months when toy sales were low. The yachts were distinguished by a large five-pointed star printed on the top of the main sail.

The company was started by Belgian refugee Franz Marie Denye, who left Belgium with his family at the outbreak of World War One and spent the duration of the conflict in Birkenhead, where his shipwright skills were in demand. Franz' family shipyard didn't survive the war, so the family decided to stay in Birkenhead, with Franz' wife Marie Valerie running a cooked meats shop while Franz made and sold toy boats through the shop. As the toy boat business grew, Franz eventually had a factory, whose signage proudly proclaimed it to be The Star Yacht Works with no mention of the fact that the yachts were toys ... which must have taken some of the edge off Franz' unhappiness at having lost his family's boatworks in Belgium. Now he had his own yacht works!

As someone trained to design and build real full-size boats, Franz took toy yacht design seriously, and the Star range built a reputation for stability and sailability – toy boats made by a toymaker without a marine engineering background might look nice but handle terribly on the water, and with the boom in model boating in the 1920s and 1930s, boaters were quick to notice when one of their friends' boats performed particularly well or particularly badly. This "social" aspect of boating, with boat owners congregating on local boating pools to sail and race, helped Star build a solid word-of-mouth reputation: the disappointed owner of a poorly-designed model yacht, seeing it fall over in the wind, and then seeing a number of other yachts operating beautifully, with the high-visibility stars on their sails, would be likely to want to make sure that their next boat was a "Star".

Star Productions, of Marion Street, Birkenhead, who are well known in the trade as manufacturers of the "Star" model yachts, inform us that they are marketing two speedboats of special value and quality. These retail at 5s 11d. and 10s. 6d., and already they have been received with such interest that there is no doubt as to their popularity. These speedboats have hulls which have been completely redesigned, and are fitted with a very strong mechanism. Other speedboats in the "Star" range retail at 1s., 1s 6d., 2s. 6d., and 3s. 6d.

Buyers of nautical toys will be particularly interested in the form's cargo-coastal steamers, which retail at 15s., 25s. and 35s. These toys are constructed by craftsmen, and although cheap in price, they must not be confused with mass-produced articles. They are very realistic in appearance, having winches which work the derricks, and are supplied with cargo, correct steamer stern and wireless aerial. They are beautifully finished and make ideal gift lines on account of the strong trouble-free clockwork mechanism.

Star Productions have already built up a reputation with their "Star" yachts, which are considered amongst the finest in the country.