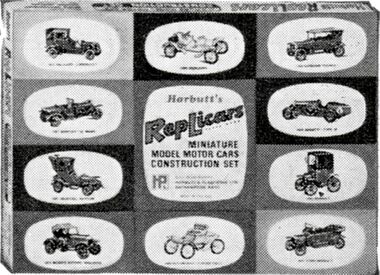 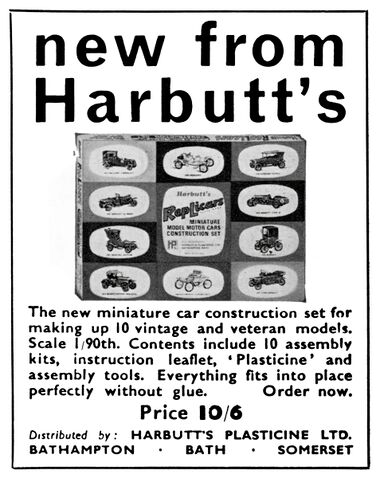 The Replicars (or RepLicars) range was a set of snap-together plastic kits of classic early automobiles.

The range was sold in the UK as Harbutt's Replicars, and was apparently also available in the US as Aurora Snap-a-roos.

The early UK adverts were a little confusing, stressing the Harbutt's name rather than the Replicars brand-name. Also confusing was the mention of included Plasticine ... which we think was probably a promotional idea, but which may have raised alarm in the minds of some people reading the ads that perhaps Plasticine played a part in the construction of the models!

The later "deluxe" sets dropped any mention of included Plasticine, and instead included paints.

We're assuming that this was a European or American range that Harbutts decided to distribute, and that Harbutt's might not have done very well with it. It might even be one of the "diversification" products that some people blamed for Harbutt's getting into financial difficulties.