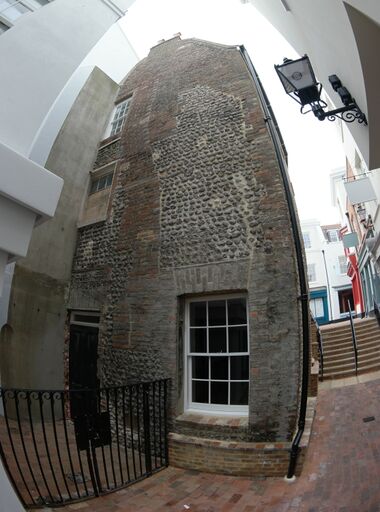 2019: Puget's Cottage, seen from the North Street entranceway to Hannigtons Lane, looking South. The upper edge of the cobbled patch, parallel with the roofline, shows an earlier roofline one storey lower, before the building was extended upwards. [image info] 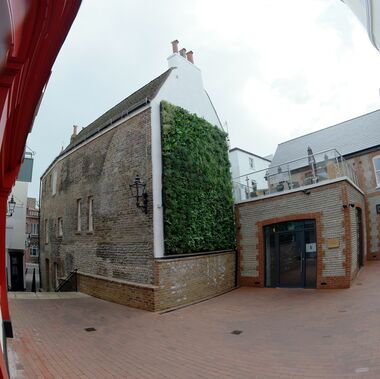 2019: The Southern (extended) end of Puget's Cottage, with living grass sculpture, and adjacent The Flint House rooftop terrace. The diagonal mark on the side of the building is supposed to be the trace of the diagonal roofline of the long-gone adjoining Puget's School. [image info] 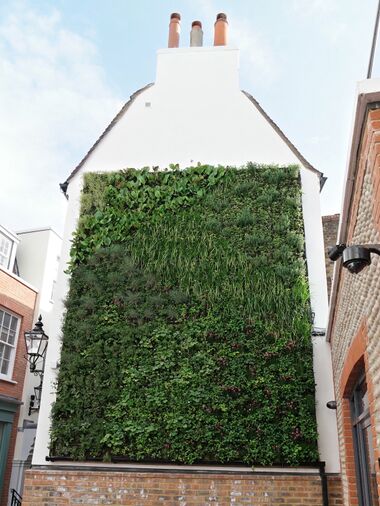 Puget's Cottage in Hanningtons Lane is generally reckoned to be the oldest house in Brighton, and also perhaps the second oldest functional building in Brighton, after St. Nicholas' Church.

The building dates back to when Brighton was an agricultural and fishing village, before it became a traveller's and tourist destination. The shape of its floorplan – long and thin, with a distinct bend – is due to it being built within the confines of the old layout of strip fields for farming, which must have extended right into what is now the centre of Brighton. The outline therefore represents a sort of "fossil" fragment of what Brighthelmstone must have been like before even the streetplan of The Lanes existed.

The reason why the building survived seems to be that ... like a fossil, or an insect trapped in amber ... it got buried and forgotten about. Adjacent plots were built on, its gardens were built on, North Street became a set of shop-fronts, the Cottage was just too far back from the road to be worth knocking down, and a "new" two-story building was built just in front of it.

The cottage was then hemmed in from all sides, not really visible from the road, partially protected from the elements by surrounding structures, and with no obvious access that the general public were likely to see.

Multiple authors of historical guides to Brighton who mention the oldest buildings in the town, writing in the early C20th, and even back into the C19th, do not seem to have been aware that the "invisible" building actually existed, and credit a different building in The Lanes as being famous for being "the oldest building in Brighton".

Although some people must have known that the building existed, and that it was pretty old (its outline will be on plans of the area, and the Hanningtons Estate will have known that they owned it), the actual status of the building doesn't seem to have been properly understood until the surveys associated with the purchase and planned redevelopment of the Hanningtons Estate in the 2010s.

The name assigned to the building, "Puget's Cottage", is a modern invention, created for convenience (apparently circa 2013). We do not seem to know what the building may have originally been called, and since there was another building in front of it, it might not even have had a proper street number address. Some time in the Nineteenth Century, (John?) Puget funded the creation of a school on an adjacent lot (Clarence Yard?), which later became known as Puget's School, but there is apparently no indication that he took part in running it, or lived nearby, or owned adjacent premises, or that the "cottage" was attached to the school, associated with the school, or directly connected to the school by accessways.

Then again, the building had to be called something, and there is and association between Puget and an adjacent or nearby plot.

The building was "excavated" from its surroundings with the creation of Hanningtons Lane, which opened in 2019.

While it seems odd to refer to a three-storey building as a "cottage", the building has at some point been extended Southwards, and upwards, and would originally have been smaller. The term "cottage" is sometimes used to mean a domestic dwelling-place, normally in a vernacular style (=made out of locally-sourced materials), whose smallest dimension (width or depth) is twelve feet or less ... so it's possible to have quite a long or deep building that's still technically a cottage.