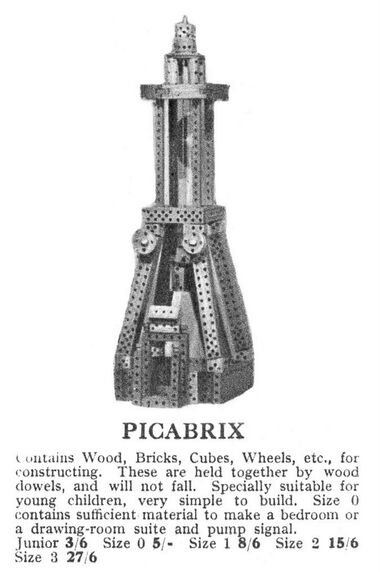 The Picabrix wooden block construction set system was patented by Arthur Gray Pickard in 1921, and manufactured by the Thornton-Pickard Manufacturing Company, Ltd. in Altringham, England.

The core system consisted of a set of rectangular blocks and wedges with holes drilled in all the faces, and wooden pegs or dowels to peg everything together. Overall, the system pieces tended to give the impression of a collection of wooden dominoes and gaming dice, with the spots replaced by holes.

"GOOD-DAY to you, Children, my name is Picabrix. I have come to amuse you. I am a very simple chap, and am sure that when you know me, which you will in about five minutes, we shall be firm friends and constant companions. In this book I am going to show you how to make many toys, just those kind which you delight in, and when you tire of the one made, you can take it to pieces and make a new one. I do not come to play with only older boys like some of my relations, but also with baby sister and baby brother. I have come to take the place of those stupid old blocks and dominoes which will insist on tumbling down just as we have nearly finished our building. I will not fall, you can build me ever so high because those dinky little pegs which you will find in the box bind all my parts together. When you have built the simple models and found how easy I am to play with, you will want to build the larger ones, that big EIFFEL TOWER, the fine GIANT SWING, and that champion BIG WHEEL which will turn round just like the one at Blackpool. If you have started with one of the smaller sets, say No.0 or No.1, you can buy the accessory sets No.0a making the No.0 set into a No.1 set or a No.1a set making the No.1 set into a No.2 set and so on, and you can always buy separate parts as shown on the list on page 12. When you have played with me a while and have got to know me write to my people at home and tell them what sort of a play fellow I am. This is my address:-"

The Thornton-Pickard Manufacturing Co. Ltd. was one of the UK's most important camera manufacturers. John Edward Thornton (1865-1940) founded the Thornton Manufacturing Company in 1886, and after rapid expansion, was joined by Edgar Pickard (1862-1897) as a business partner.

Pickard's death in 1897 resulted in Pickard's share in the company being inherited by his family, who Thornton didn't get on with, and Thornton not only left the company, but left the country for a new start in the US.

The company diversified into toys in 1921 after Arthur Pickard took over the company, and then entered a steady decline during the inter-war years, ceasing to exist as a manufacturing company in around ~1939.