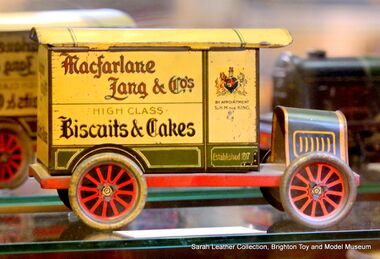 The company expanded to include a new bread factory at Wesleyan Street in Calton, Glasgow in 1880 and opened Victoria Biscuit Works to start manufacturing machine-made biscuits in 1886. An expansion to London in 1903 saw the opening of the Imperial Biscuit Works in Fulham and the company's name was changed to Macfarlane Lang & Co. in 1904. A new Victoria Biscuit Works with modern equipment was opened in 1925 in Tollcross.

Macfarlane Lang is one of the companies that had biscuit tins made for them by the decorative tin manufacturers Barringer, Wallis and Manners. Two examples of these, the Birds Nest tin and the Biscuit Lorry tin can be seen in the museum’s Biscuit Tins display.