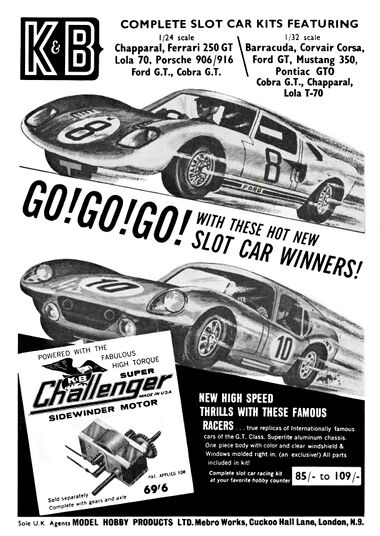 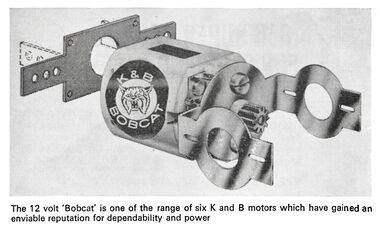 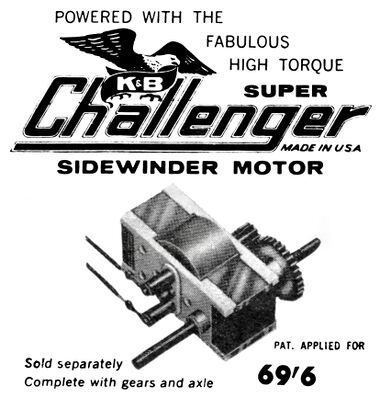 While they were a division of Aurora, the parent company sometimes liked to brand them as K & B Aurora, as K&B were considered a premium or prestige brand in serious slotcar racing circles, and this association probably increased the prestige of the Aurora HO range.

K&B slotcars supported the larger 1:24 scale (which was good for commercial "Raceway" racetrack venues, as it made the cars easier to see), and during their Aurora years they also ventured into 1:32 scale kits ("Scalextric" scale, the default scale in the UK), which was smaller, but still around twice the size of Aurora's own miniature HO-scaled "Model Motoring" sets.

K&B were responsible for producing perhaps the most desirable production model slotcar ever made: if you want to buy one of their 1960s model Batmobiles in mint, boxed, condition then ... assuming that you can find anyone willing to part with one ... you can probably expect the asking price to be around six thousand dollars.

If you're a regular at one of the new Raceway Centers that are springing up all over the country, you've probably been running K&B cars (a division of Aurora Plastics Corp.), the kind most champion drivers prefer. Be sure to see K&B's new "Ford Lotus 30 Charger", a terrific racing machine with a terrific motor – the winningest "Royal Bobcat" inliner. With K&B cars and equipment, you're automatically the favourite in the race.

The best thing to do – if you're really serious about model car racing – is SEE YOUR PRO. the man behind he counter at your local Hobby Shop or Raceway Center. He knows what's new, what's best, and what's winning; he'll steer you right every time. Look for this "Pro" seal in the window. One last bit of advice: the name "Aurora on sets and equipment means you're getting the best there is. Aurora pioneered the whole sport of model car racing in the United States and it still leads the pack by a country mile.

Media in category ‘K and B’