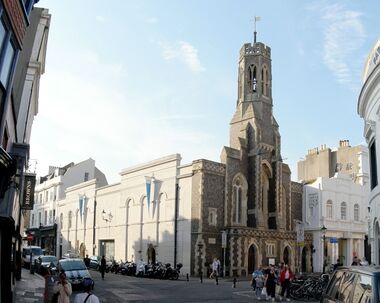 2018: View of Ship Street Chapel, with light blue Fabrica pennants along the left side [image info] 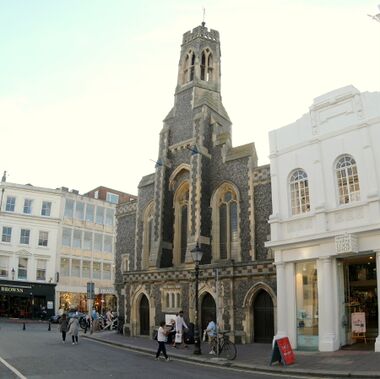 The fairly plain white side-wall along Duke Street with semicircular arch-style detailing might be original ... but the reason that it's so plain is that it was originally hidden behind other buildings, which were removed in the ~1850s to widen Duke Street, revealing the wall. So even if this wall was there in the 1820s, any 1820s residents wouldn't necessarily recognise it.

Early 1990s: earmarked for a Museum of Brighton

The building was intended in the 1990s to be turned into a dedicated Museum of Brighton showing the history of the town, with Brighton Museum and Art Gallery's relevant exhibits transplanted to the site (documented in the 1990 "Encyclopaedia of Brighton"), but this seems to have never quite come to pass.

Since 1996, the building has been actively used by the Fabrica art organisation as a venue and art gallery.

This elegant place of Worship was erected in 1817, by Thos. Read Kemp, Esq. Member of Parliament for Arundel, and here he officiated as a Dissenting Minister for some time; when that gentleman returned into the pale of the Establishment, and resumed his seat in the House of Commons, it came into the possession of George Faithful, Esq. a respectable Solicitor in this town who is now the officiating Minister.

The entrance to this Chapel is under a portico, supported by four stone columns. The front of the Chapel is covered with composition, and the entrance displays much taste and elegance; in the centre, rises a dome, covered with glass.

The Pulpit is a beautiful piece of workmanship, and is much admired. It is in the form of a vase, and stands on an Ionic fluted column. The Chapel will hold about 900 persons. It has a very fine toned Organ. Hours of service, on a Sunday, are Eleven and half-past Six.